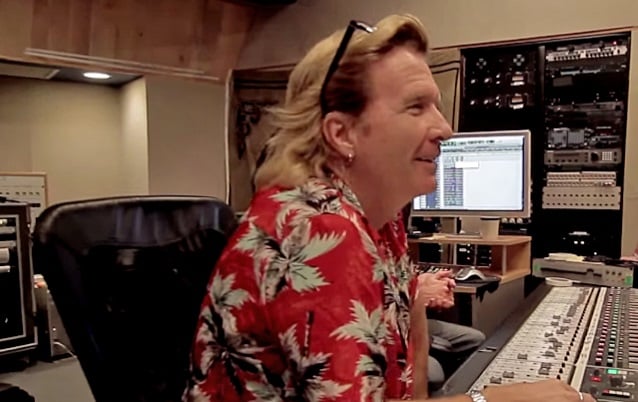 Brazil's Wikimetal podcast recently conducted an interview with Canadian producer Bob Rock, who has been responsible for some of the biggest rock and metal albums of the last 30 years, including all of METALLICA's studio output during the 1990s and early 2000s. You can now listen to the chat using the audio player below.

Asked if he was aware that he was creating "music history" when he worked on METALLICA's mega-selling self-titled album in 1990 and 1991, Rock responded: "No, not at all. Maybe they were, but I wasn't. I was really… That's early on in my production career, so I was just really trying to — the more I got to know them — bring out what I thought were the best things about the band: James' [Hetfield] lyrics, guitar playing, and then the feel. We concentrated on really getting a great feeling rhythmically. So, when you're in it, you don't really know the results; you can't foresee that kind of thing. I think, really, the only two songs that I knew were gonna do something in the [recording] stages were 'Livin' On A Prayer' by BON JOVI and 'Working For The Weekend' by LOVERBOY. Those ones I thought, 'These things are probably gonna do well.' Other than that, you just never know… you just never know while you're doing it. I thought it was a special record, though. Because, I think, knowing those guys a long time, the 'black' album is a very personal record, it drew everybody in, not just metal fans. I mean, doctors, lawyers, teachers… everybody bought that record. So it must have had something that just appealed to everybody, and I think that comes down to the lyrics, and, of course, the music."

Rock also talked about his involvement in the "Metallica: Some Kind Of Monster" documentary, which followed the band through the three most turbulent years of their long career, during which they battled through addiction, lineup changes, fan backlash, personal turmoil and the near-disintegration of the group during the making of their "St. Anger" album. He said: "That movie was two and a half years in my life with those guys. They were fragmenting and falling apart. Really, I was a friend, more than anything, on that record, just trying to keep those guys together and inspired and going. So the movie had to tell a story in two and a half hours, but, realistically, when I watch the movie, I don't really… It's just a very small fragment of what actually happened. You would have to write a very long book to really talk about everything that went on at that time, and actually to explain why the album sounds like it does, etc. Actually, there should be a documentary on the documentary [laughs] — to be quite honest — to get the full story."

Rock, 61, told Reuters in 2006 that he felt "20 years younger" after his split with METALLICA, whose last studio effort, "Death Magnetic", was helmed by Rick Rubin.