METALLICA, SLAYER, MEGADETH and ANTHRAX — the so-called "Big Four" of 1980s thrash metal — will play together for the first time in history tomorrow night (Wednesday, June 16) at the Sonisphere festival at Bemowo Airport in Warsaw, Poland.

The first photo of all the members of the four bands (minus SLAYER guitarist Jeff Hanneman) hanging out in a room together, apparently taken earlier today (Tuesday, June 15),can be viewed below.

"It's about fucking time this happened," says SLAYER's Kerry King, "and about time the fans finally get what they want. This is fucking awesome."

ANTHRAX guitarist Scott Ian agrees, commenting on the enormity of the announcement. "People have been talking about these four bands playing together since 1984," he says. "That's twenty-six years of expectation!! And the thing is, I believe not only will we live up to the expectations, we will shatter them! No other four bands as influential as the four of us have ever done this. Imagine if THE BEATLES, STONES, THE WHO and ZEPPELIN had done shows? Or SABBATH, PRIEST, MAIDEN, MOTÖRHEAD? Well, I may be getting into some rarified air here but as a fan, that's how big I feel this is."

These four legendary acts broke out of the underground thrash movement to dominate the metal world in the 1980s, selling millions of records and packing arenas across the globe. The metal giants have never before all shared the same stage, despite huge demand.

A second "Big Four" appearance is planned for Sonisphere Switzerland two days after the Warsaw concert, with more Sonisphere shows featuring the awesome combo to follow.

"This is a 'once-in-a-lifetime' opportunity for heavy metal fans to see the four greatest heavy metal bands in American history back together on one stage," concludes MEGADETH mainman Dave Mustaine. "If there are any heads left at the end of this festival that haven't banged, they don't belong there."

The "Big Four" concert on June 22 in Sofia, Bulgaria will find its way to the U.S. via a satellite broadcast. That day's show, as part of the Sonisphere festival, will be beamed to more than 450 movie theatres in more than 140 markets in the U.S., along with cities in Europe, Canada and Latin America.

The concert will be broadcast to theatres in high definition. Delayed screenings are planned for Australia, South Africa and New Zealand.

METALLICA's Lars Ulrich said in a statement, "Who would have thought that more than 25 years after its inception, thrash metal's 'Big Four' would not only still be around, be more popular than ever, playing shows together at stadiums all over Europe, and on top of that, coming to a movie theater near you in high definition (for better or worse??!!). Bring it on!"

Click here for a bigger version of the photo below. 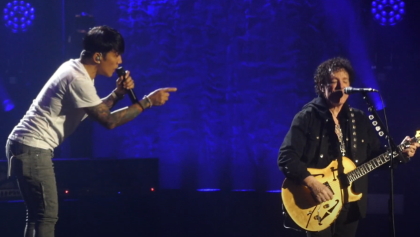 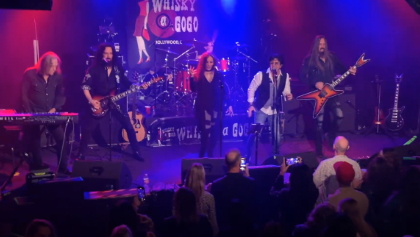 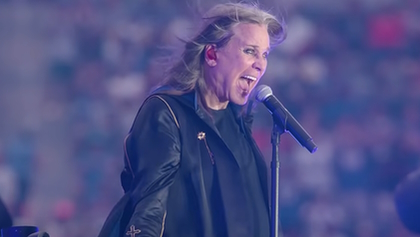