METALLICA, THE WHO Confirmed For OUTSIDE LANDS' 10th Anniversary

METALLICA is among the confirmed artists for Outside Lands' 10th anniversary. The world's original gourmet music festival takes place August 11-13 at San Francisco's historic Golden Gate Park, bringing together the best music, food, wine, beer, art and comedy from across the region and the world. Regular priced 3-day and VIP tickets will go on sale this Thursday, April 6 at 10 a.m. PT exclusively at SFOutsideLands.com.

As Huffington Post wrote of last year's festival, "there's a lot to love about Outside Lands: the diverse slate of musicians, the unbelievable food options, the magical forest-like setting." For its 10th anniversary, Outside Lands has gone above and beyond to bring together some of the most talented artists the world has to offer while creating a festival lineup you won't see anywhere else this season. Legendary rock band THE WHO, heavy metal icons and Bay Area natives METALLICA, and a rare festival appearance from GORILLAZ lead a lineup that features the likes of LORDE, FLEET FOXES, QUEENS OF THE STONE AGE, ALT-J, SOLANGE, A TRIBE CALLED QUEST, LITTLE DRAGON, BELLE AND SEBASTIAN, THE AVETT BROTHERS, ABOVE & BEYOND, TOVE LO, ACTION BRONSON, THUNDERCAT and many, many more.

Outside Lands is among the rare festivals anywhere in the world to sell out immediately upon lineup announcement and ticket release, boasting six consecutive sellouts to date. To show Outside Lands' ongoing commitment to the local community, the festival has contributed nearly $17 million to the San Francisco Recreation & Park Department.

Once again, the world's original gourmet music festival will offer ticket-holders a wide array of culinary options. This year, fans will have access to more than 80 Bay Area restaurants, 40+ Northern California wineries, close to 30 west coast breweries, and a collection of the region's best cocktail bars. Outside Lands also features ten distinct experiences that celebrate San Francisco's culture and excite the senses, including Taste of the Bay Area, Wine Lands, Beer Lands, The Back Wine, Cocktail Magic, the Festival Market Place, Outsider Art, Eco Lands, as well as The Barbary, named in honor of San Francisco's Barbary Coast district and featuring the best of comedy and cabaret, and GastroMagic, a fully programmed stage devoted to one-of-a-kind culinary and music collaborations. The Outside Lands 2017 food and drink lineup will be announced soon.

Since its inception, Outside Lands has evolved into a beloved San Francisco tradition and boon for the Bay Area, as thousands of fans from around the world flood the iconic city for an incomparable weekend in one of America's greatest parks. The festival generates over $70 million annually for San Francisco's economy, employing over 4,850 people in and around the area in the process. Additionally, Outside Lands diverts more waste than any other festival of its size, with an astonishing 91% of last year's waste consisting of reusable, recyclable, and compostable materials. 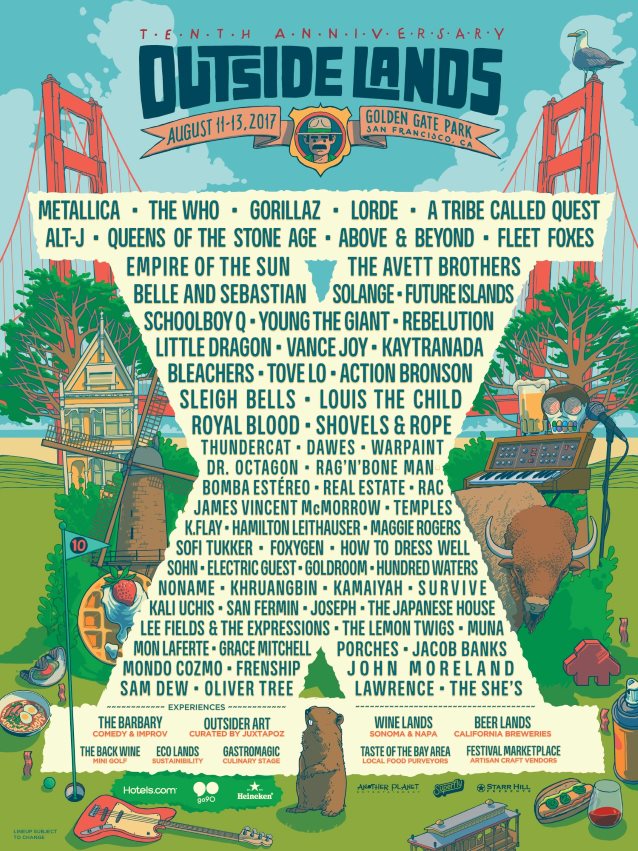