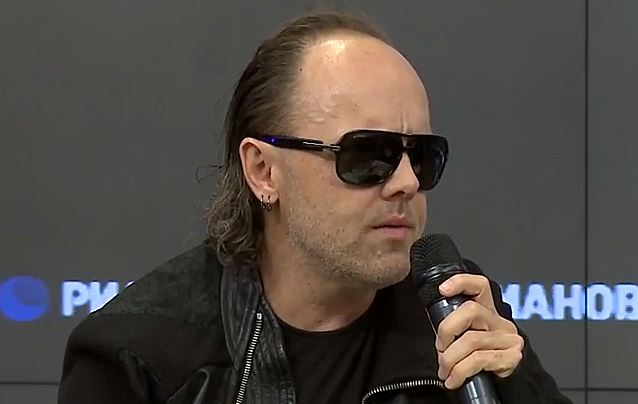 METALLICA To Cross 'Another Frontier' In December, Promises LARS ULRICH

METALLICA drummer Lars Ulrich was interviewed this past week by Nikki Blakk of the San Francisco, California radio station 107.7 The Bone about the band's new 3D IMAX movie, "Metallica Through The Never". You can now listen to the chat in the YouTube clip below.

Asked if there are any other surprises METALLICA has in store for its fans, Ulrich said: "There's a very interesting thing coming our way in December. Nobody knows that, so… There's another frontier heading in METALLICA's direction in December. Which, if anybody [working for the band's management] even knew that I just said what I just said, they would hunt me down and silence me. But there is another frontier coming in December, which we're very excited about."

Lars was also asked if there are already plans underway for METALLICA to stage the third installment of its Orion Music + More festival in Detroit, Michigan next year.

"We haven't gotten that far the last couple of months," Lars said.

"Detroit was a great experience. We'd love to bring this thing back to Detroit. We've gotta sit down and look at the practical parts of it. And our good friends at [promoters] C3 [Presents] have gotta sit down and probably get their calculators out and all that stuff that we try to stay out of…

It's great to do [Orion], we love doing it. I'd do Orion for the rest of our lives, if possible.

"It's not an easy thing to launch a festival, but we've had a lot of fun the last two years doing it, and we hope to bring it back to Detroit.

"We've gotta run around the world for the next six weeks and hear ourselves talk about this movie and all that stuff, but probably on the other side of that, in October or November, we'll start looking at the realities of Orion next year and then take it from there."

Spokesperson Charlie Walker of promoter C3 Presents said a few months ago that around 20,000 attended the first day of this year's Orion Music + More, with possibly more showing up on the second day.

A total of 37 groups, including the RED HOT CHILI PEPPERS, DEFTONES, SILVERSUN PICKUPS, RISE AGAINST and BASSNECTAR, performed on Orion's five stages.