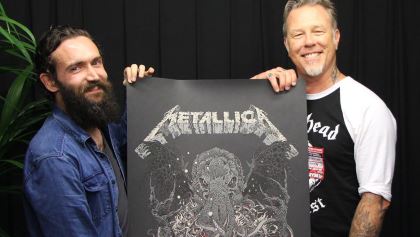 Next week, METALLICA will release an "incredible" illustration of the almighty monster Cthulhu, who was the subject of the band's classic instrumental "The Call Of Ktulu".

Richey Beckett's epically detailed artwork will go on sale in the Met Store at Metallica.com on September 10 at 1 p.m. Pacific Time. In addition to being available on a black t-shirt, the art will be featured as two screen printed, fine art prints on black paper. The limited-edition prints will be available in two different colored versions.

Met Club members will have exclusive access to "The Call Of Ktulu" for one week. After that, the t-shirt will be released to the public and any remaining prints will be made available.

Written by James Hetfield, Lars Ulrich, Cliff Burton and former METALLICA lead guitarist Dave Mustaine, "The Call Of Ktulu" (original title: "When Hell Freezes Over") was inspired by the story "The Call Of Cthulhu" by H.P. Lovecraft.

Speaking with Guitar World magazine in a 2002 interview, METALLICA guitarist Kirk Hammett explained how he came up with the guitar melody in this track. "I tracked the whole album with Marshall amps and my Gibson Flying V," he said. "For that song, I knew that I wanted to come up with something really melodic at the beginning of the solo. At that point in the song, there's just a lot of riffing, a lot of heavy dynamics. I was thinking, 'Wouldn't it be nice if we had something somewhat melodic to lead into it?' Hence that little melody I played… It was our first instrumental, and it was an incredibly long guitar solo. It was like, 'How can I keep this solo going without making it sound like I'm just playing a bunch of notes?' So I thought that I would break it up into sections rather than play one long spew of notes."

He continued: "I used a modal approach, and there's also arpeggios that I play in the solo — they're actually 'broken arpeggios,' a term that I got from Yngwie Malmsteen. At that time, 1984, Yngwie was big in the guitar world; he influenced me in that he was using all these different scales and different arpeggios, and really got me thinking about that kind of sound. I was also thinking chromatically: there's that one part at the top of the next cycle where I play a chromatic lick that goes all the way down the high E string with the wah pedal."

Hammett added: "I actually wrote out the entire solo on pieces of paper, using my own notes and my own pet names for the individual licks. I would say that 80 percent of it was composed beforehand and 20 percent of it was improvised. When we revisited that song with the symphony on 'S&M', it was a lot of fun; it felt like I was visiting my guitar technique from, like, 15 years ago or something. I just don't play like that now — I'm a lot bluesier — so it was pretty trippy."

Next week we're excited to be releasing an incredible illustration of the almighty monster Cthulhu, who was the subject...

Posted by Metallica on Friday, September 4, 2015