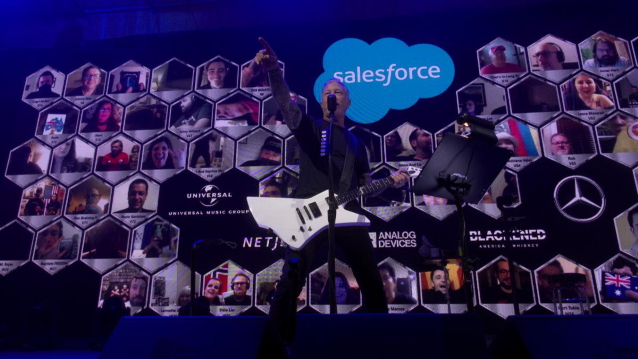 METALLICA, which is known for its energetic, all-encompassing live concerts, raised the bar for virtual performances during its "Live & Acoustic From HQ: Helping Hands Concert & Auction" charity event on November 14. The band used Virtual Crowd technology to get up close and personal with fans around the world. Virtual Crowd, a fully customizable and scalable multimedia technology, allows artists to interact with their fans in real-time while showcasing high-quality production value and design — something that METALLICA took to the next level with their show as they rocked out while surrounded by walls of video screens displaying faces of their fans, some of whom they engaged with during breaks in the music.

Virtual Crowd technology, created by Fireplay in partnership with Production Resource Group (PRG) and Clair Global, has been a boon for behind-the-scenes live event masterminds like Dan Braun, METALLICA's creative director and scenic designer. He was absolutely dazzled by the stunning and seamless Virtual Crowd integration into the "Helping Hands" event. Braun had an idea of bringing live crowds into virtual event but wasn't sure it was possible to execute. After PRG showed him a demo of Virtual Crowd and introduced him to the Fireplay team, he was blown away.

"The PRG folks are old hands in the world of METALLICA," he explained. "They integrate Fireplay into our family so quickly, it's like they been with us for years. Keeping up with changes challenges most folks that are new to our camp. The Fireplay people not only kept up — they contributed in ways that made the event better!"

Concerns over scalability and the lack of a dress rehearsal due to a citywide power loss the day before loomed large as the start of the event approached. When it came to showtime, the onsite team and the solution delivered beyond Braun's wildest dreams.

"Of course, none of the pre-show stuff means anything if it doesn't work when it's showtime," Braun reflected. "Working without a net, as usual with this band, we flip the switch and go live. It's perfect, flawless!"

"Fireplay and PRG took an idea and created a very real way for the band to play live, in front of their fans, in real time. The band could not only see their audience — they could feel them in the clapping and screaming as they finished songs," said Braun. "But that's not the greatest part! The technology and teamwork allowed us to remove the physical barriers between the band and their fans, even during this crazy time of the COVID-19 virus. When the band interacted with audience members one-on-one, they were actually in the studio with the band. There was nothing virtual about it! Even more, the rest of the audience watching the interaction could feel the intimacy — they were also brought 'into the studio' with the guys. That was the vision I had, and that is what PRG and Fireplay delivered."

"We always try to push our productions to the edge in an effort to continue to wow the fans not only from a musical aspect but from an artistic one, too," Zajonc said. "Our partnership with PRG and Fireplay went smoothly, and we were only able to deliver a great experience for both the band and the fans due to the planning and level of excellence all of the crew brought to the table. The level of cooperation and technical expertise in all departments was amazing to be a part of. Dan Braun designs a great show, and we get the opportunity to bring it to life. I am proud to have been a part of this with such a fine organization."