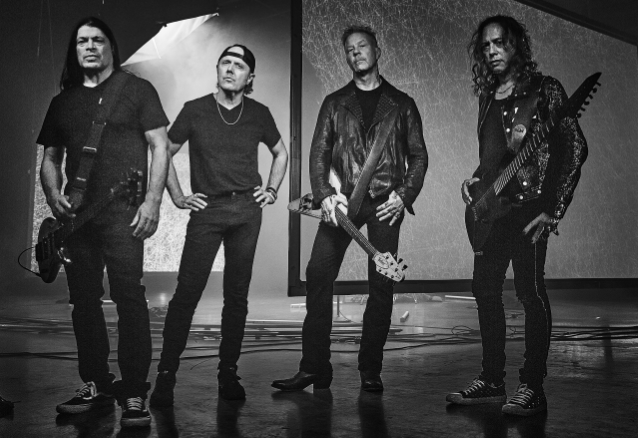 METALLICA has warned fans about a series of cryptocurrency scams circulating on social media following the announcement of the band's new album, "72 Seasons".

The warning follows a report that a 51-year-old Manhattan man was scammed by a fake METALLICA YouTube channel into transferring approximately $25,500 of Bitcoin.

The band wrote: "In the wake of last week's exciting news of our new song, new album, and new tour, unfortunately the ugly side of social media made an appearance. Many of you have let us know about YouTube channels and live streams, as well as websites, claiming to offer METALLICA Crypto giveaways in conjunction with last week's announcement.

"Let's be as clear as possible. These are scams. They're being streamed on fake YouTube channels posing to be ours and all pointing to websites that we do not run. Please remember — all of our official social media channels are verified. Always look for official verification before believing something wild and crazy to be true. We thank all of you who have been vigilant in reporting these live streams to YouTube and to us… please don't let up!"

The statement also listed METALLICA's official social media accounts, and ended with the following word of advice for fans: "Be familiar with the symbols that indicate an official channel and report anything that is a scam!"

METALLICA will release "72 Seasons" on April 14, 2023 via the band's own Blackened Recordings. Produced by Greg Fidelman with METALLICA's James Hetfield and Lars Ulrich, and clocking in at over 77 minutes, the 12-track "72 Seasons" is METALLICA's first full-length collection of new material since 2016's "Hardwired…To Self-Destruct".

Last week, METALLICA released the Tim Saccenti-directed music video for the LP's first single, "Lux Æterna", along with details about the album's accompanying "M72" world tour featuring two-night stops in nearly two dozen cities. Presented worldwide by Liquid Death and Blackened American Whiskey (in North America only) and promoted by Live Nation, the 46-show trek will launch in Amsterdam on April 27 and will include shows all over Europe and North America through 2024. Each "No Repeat Weekend" on "M72" will feature two completely different setlists and support lineups. The "M72" tour will feature a bold new in-the-round stage design that relocates the famed METALLICA Snake Pit to center stage, as well as the "I Disappear" full-tour pass and the debut of discounted tickets for fans under 16 years of age. Opening acts for the tour include PANTERA, MAMMOTH WVH, FIVE FINGER DEATH PUNCH, ICE NINE KILLS, ARCHITECTS, VOLBEAT and GRETA VAN FLEET.

In the wake of last week's exciting news of our new song, new album, and new tour, unfortunately the ugly side of social...

Posted by Metallica on Monday, December 5, 2022