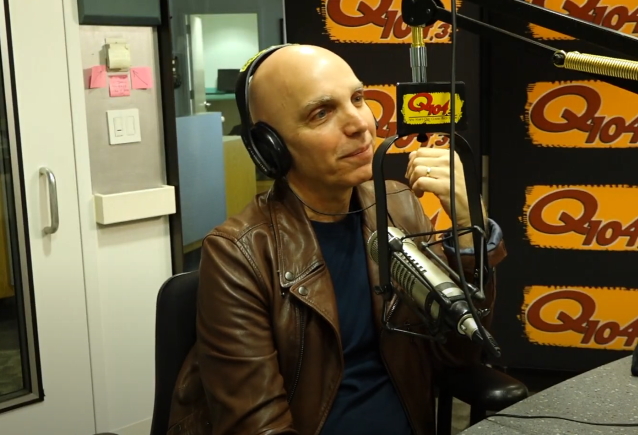 During an appearance on the "Out Of The Box" show, which airs on the Q104.3 radio station in New York City, Joe Satriani spoke about being approached to reproduce Eddie Van Halen's guitar parts as part of an all-star VAN HALEN tribute project with Alex Van Halen and David Lee Roth. Recalling how the proposed pairing came about, Joe said (as transcribed by BLABBERMOUTH.NET): "I get a call out of the blue from Alex Van Halen, who I'd never met until then, and he poses the unimaginable to me, which is to go out with a VAN HALEN tour, playing guitar. And as I've told other people, I heard my voice saying, 'Yeah, I'll do that,' before my brain really thought, 'Don't say 'yes.' That's an impossible thing to do; you can't replace Eddie Van Halen. Nobody can.' But I had such a good conversation with Alex, and just getting to know him on a few phone calls. And he brought Dave into the loop, who I'd met before but I can't really say I know the man… And we came close to doing that sort of coming out show that New York City was holding [in Central Park] last year," he said, apparently referring to "We Love NYC: The Homecoming Concert', which was held in August 2021. "And that would have been frightening, 'cause it was only three weeks away. And I was still listening to the VAN HALEN stuff, but still working on [my latest solo] album. So it wasn't like we were prepared. There was no bass player. They hadn't really told me who was gonna play bass. And then there was the whole controversy about who should actually be in the band. And I was on the outside; I'm just some new guy. I was the one saying, 'Who's playing bass, by the way?' And, 'Is Sammy [Hagar, former VAN HALEN singer] gonna come by?' And, 'Did you talk to Mike [Anthony, former VAN HALEN bassist]?' So, conversations kept going on and on. I met with Alex at one point when I went down to L.A. But I think there's some internal stuff that needs to get worked out with the family, and then the VAN HALEN band family, which is kind of big. Again, I feel like I'm not close to the top of that queue. And many times I've told Alex, 'Are you sure? Me?' 'Cause I don't perform like Eddie. I'm just a superfan. And I can certainly play the stuff. But Eddie was such an original — just the way he ran around on stage and sang and played. It's amazing."

Satriani also once again said that Wolfgang Van Halen is a more natural choice to play Eddie Van Halen's parts than anyone else. He made his comments three months after Wolfgang performed his late father's songs at the Taylor Hawkins tribute concerts. The son of Eddie Van Halen played three VAN HALEN songs — "On Fire", "Hot For Teacher" and "Panama" — over the course of two concerts in September alongside Dave Grohl on bass, Josh Freese on drums and THE DARKNESS's Justin Hawkins on vocals.

"That was beautiful, wasn't it?" Joe said about Wolfgang's tribute to his father. "That's the first thing I thought after. I was, like every other VAN HALEN fan, so relieved to see a very beautiful expression of a son playing his father's stuff. And after all the weight that must be on Wolf's shoulders about this whole thing, and he's had to deal with Dave and everybody else commenting about this kind of stuff. And he just went and settled it right then and there. So I thought to myself, well, he should do it, and maybe just he and his uncle Al should just work this out. And it would be nice if somehow Dave and Sammy could sort of kiss and make up and figure out a way to do it right. I know Sammy quite well and we talk all the time, and he's always open to move forward and mend fences. So I'm hopeful that maybe he can have a hand in it."

This past October, Wolfgang told Classic Rock magazine that he was no longer actively interested in pursuing the idea of a standalone Eddie Van Halen tribute event. "I think I already did it with the Taylor Hawkins tributes," he explained. "I feel a lot of closure because my part of the show was a tribute to my father."

"When it comes to VAN HALEN and entities surrounding the band it's unfortunate, certainly compared to FOO FIGHTERS who have their shit together with interpersonal relationships," Wolfgang added.

"I don't know what it is with some bands but certain personalities just can't get over themselves to work collectively for one purpose. That's been the curse of VAN HALEN for its entire career. So my playing at the Taylor shows delivered that catharsis without the stresses of dealing with the VAN HALEN camp, and the players involved. Their camp is very dysfunctional — everyone! Hell, it was difficult to make plans even when the band was active."