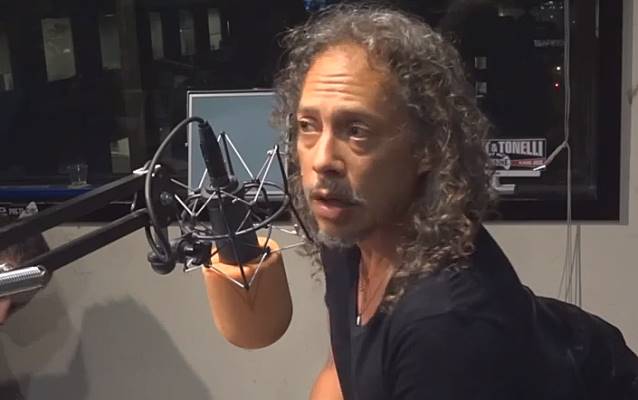 METALLICA's HAMMETT: Other Than Our Fans, No One Else Was Interested In 'Through The Never' Movie

METALLICA's 2013 IMAX 3D concert film, "Metallica Through The Never", arrived on DVD, Blu-ray, 3D Blu-ray, video on demand and digital on Tuesday (January 28) through the band's own Blackened Recordings label. The $18 million film, which combined concert footage with a fictional narrative, made less than $4 million in its initial U.S. box office run last fall.

Although METALLICA expects to start working on its 10th studio album soon, drummer Lars Ulrich has all but ruled out any chance of the disc arriving in 2014. At the Grammy Awards last Sunday (January 25),Ulrich was first asked whether METALLICA plans to make another movie. He replied, "One at a time. The next thing we have to give birth to is another record, so that's the focus for '14 and '15." Asked when fans might get to hear the new disc, Ulrich added, "I would say definitely not before '15."