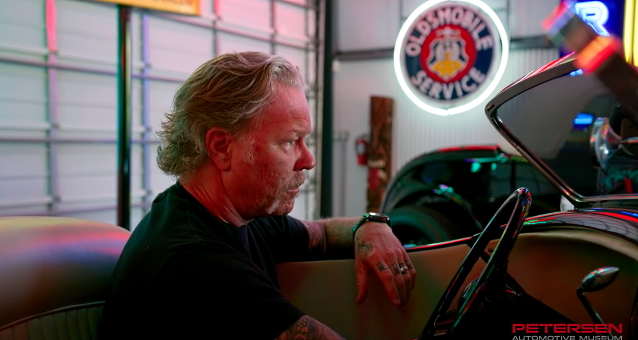 In 2019, METALLICA frontman James Hetfield donated his car collection to the Petersen Automotive Museum in Los Angeles. James has always been a car guy and shares his car journey to one of the coolest custom car collections around. Hetfield has described seeing cars in the same way he sees music: as forms of freedom and expression that convey the passions of their creator.

Best known as a co-founder, songwriter, singer and guitarist for the heavy metal band METALLICA, Hetfield has also gained recognition in the automotive world for his unique collection of entirely bespoke vehicles. While the vast majority of collectors acquire vehicles by purchasing pre-existing examples, Hetfield elected instead to build his from scratch, channeling creativity often reserved for his music into the production of rolling sculptures.

A new five-minute video in which Hetfield discusses his collection can be seen below.

Hetfield made his first major public appearance since entering rehab on January 30, when an exhibit featuring 10 of his classic custom cars opened with a ticketed reception at the Petersen Automotive Museum.

Hetfield took part in a chat and helped auction two of his ESP guitars at the event. He said he was proud to have his work on display at the museum. "There's no other place like this," James said. "The Petersen is the pinnacle. It's the best place to have your vehicles. They weren't doing me much good sitting in my garage. I loved looking at them. The best part is they're all together. I didn't want to auction them off and [have them] go all over the world. It's a collection. It marks my life."

As previously reported, a book about Hetfield's cars, "Reclaimed Rust: The Four-Wheeled Creations Of James Hetfield", was released on May 5 via Insight Editions. In the book, Hetfield opens up his garage for an exclusive tour of the highlights of his incredible collection of restored and customized classic cars.

A few years ago, Hetfield said that he approaches building hot rods the same way he approaches writing music. "Building cars is always an escape," he explained. "It's the same with music. I don't know what I'm gonna make. Cars are like people to me; they like love. They love to be touched, they love to be handled, they love to be driven... they love to be admired… This is a form of expression and freedom, and you can get away with driving something like that but still have your personality show through. It's just like looking at art. You look at a piece and you go, 'I don't get it.' And you look at something else and say, 'That is amazing. I wish I thought of that.'"