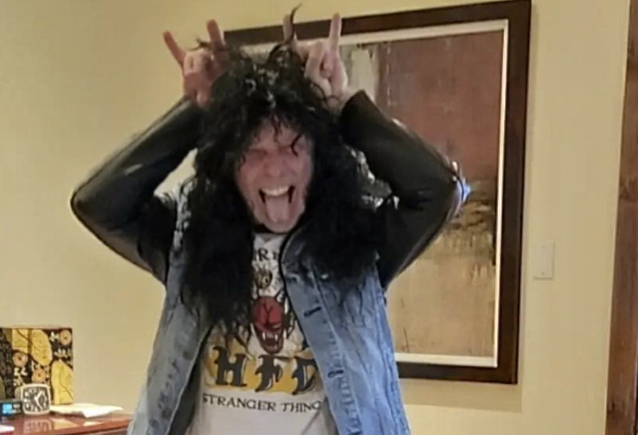 For this year's Halloween, METALLICA frontman James Hetfield dressed up as "Stranger Things"' long-haired, leather-clad character Eddie Munson, who played an instrumental version of the band's 1986 track "Master Of Puppets" in one of the season four's final episode's key scenes.

This past July, METALLICA met and jammed with Joseph Quinn, the actor who played Eddie Munson in "Stranger Things", at a rehearsal for their headlining gig at the Lollapalooza music festival in Chicago.

During the private meet-up, Quinn jammed with METALLICA and they gifted him a custom and signed B.C. Rich guitar just like the one Quinn played on the show.

Hetfield told the 28-year-old he's been a fan of the hit Netflix show since its first season.

"My kids and I, it's been a bonding experience for us," Hetfield said.

Quinn revealed he consistently listened to the tune over the past two years and felt "very connected" to the band.

"Thank you so much for letting us use the track," Quinn told the band.

"Thanks for doing it justice," Hetfield responded.

After their chat, bassist Robert Trujillo invited Quinn to a backstage jam session.

Quinn, who has been playing guitar since he was a child, joked, "I'm a bit rusty, so I might need a lesson."

Afterward, Quinn told the Netflix-owned fan site Tudum: "It was amazing! Opportunities to play 'Master Of Puppets' with the most iconic metal band of all time don’t come around very often. A story for the grandkids."

Hetfield, Trujillo and the other METALLICA members — drummer Lars Ulrich and guitarist Kirk Hammett — have enthusiastically embraced the scene since it first aired this summer.

"The way The Duffer Brothers have incorporated music into 'Stranger Things' has always been next level, so we were beyond psyched for them to not only include 'Master Of Puppets' in the show but to have such a pivotal scene built around it," METALLICA said in an Instagram post on July 5. "We were all stoked to see the final result and when we did we were totally blown away. … It's so extremely well done, so much so, that some folks were able to guess the song just by seeing a few seconds of Joseph Quinn's hands in the trailer!! How crazy cool is that?"

The band added: "It's an incredible honor to be such a big part of Eddie's journey."

The "Stranger Things" guitar solo was actually performed by Tye Trujillo, the 17-year-old son of the band's bassist.

METALLICA also shared a TikTok video of the bandmembers playing a "duet" of the song with Munson.