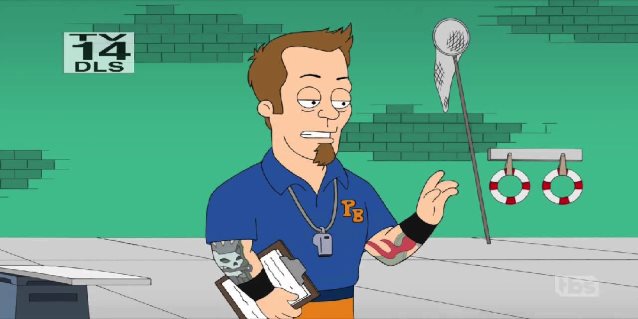 METALLICA frontman James Hetfield recently did voiceover work for the hit animated series "American Dad". The show, which originated on Fox but now airs on TBS, featured Hetfield an as a water polo coach also named "James Hetfield." The running gag is that the coach claims he is not James Hetfield from METALLICA, even though he looks and sounds exactly like him, and makes constant references to the band. Some of METALLICA's music — including the songs "Master Of Puppets" and "All Nightmare Long" — is used in the episode.

Hetfield told Collider in a 2013 interview that he loved "American Dad". He said: "I don't watch a lot of TV. Our kids just discovered that there is such a thing as TV. They thought they were watching it the whole time, but we were putting DVDs in. [Laughs] I like the cartoon shows. I love 'Family Guy', I love 'American Dad', I love stuff like that. It's another level. It's hilarious. It makes me laugh."

METALLICA has been working on a new album, but there is no word if any new music will be aired at the performance.

Lead guitarist Kirk Hammett confirmed last November that the band was in the process of recording new material, saying, "At this point, we're still just doing basic backing tracks. James [Hetfield, guitar/vocals] is doing his guitar stuff, and I am just kind of waiting patiently to go in there and do all of my guitar stuff."

The last METALLICA album, "Death Magnetic", came out in 2008.

So...did anyone else know that @metallica's @papa_het_ appeared on #AmericanDad this week?

No seriously, how did I NOT know @metallica's @papa_het_ was going to be in this week's #AmericanDad episode?! #AndWhoTheHellThoughtOfMakingHimAWaterPoloCoach? #AndRogerForAll