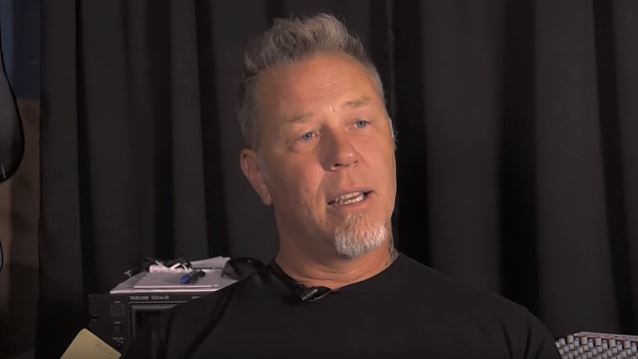 METALLICA's JAMES HETFIELD: 'I Would Like To Make Some New Music Sooner Than Eight Years'

James Hetfield says that the reaction to METALLICA's new album, "Hardwired… To Self-Destruct", has been so positive, it has inspired him and his bandmates to release the next record sooner.

"Hardwired", the quartet's first album in eight years, came out on November 18, and the early response has been mostly positive, with music industry web site Hits Daily Double now predicting that the effort will sell between 305,000 and 315,000 copies in the U.S. in its first full week of release.

Speaking to Italy's Linea Rock about METALLICA's plans for the foreseeable future, Hetfield said (hear audio below): "I think we plan… At least for now, we've booked out two years [of touring]… at least. So I can't predict the future, but we start there and hopefully there's more than that. And I would like to make some new music sooner than eight years, for sure. [You get] such a pleasure and a joy of hearing your new music and having other people hear it. So we don't wanna wait that long."

Hetfield also spoke about the striking "Hardwired… To Self-Destruct" cover artwork, which features photos of all four members making angry faces and looking in different directions superimposed on top of each other. He said: "I think it's a really cool idea to layer the different sides of us together. And especially the album cover, I think it's really powerful to have a visual of this METALLICA beast as multiple faces with multiple emotions and expressions."

METALLICA revealed over the weekend that "Hardwired" is No. 1 in 57 countries, with the album going Top 3 in 75 nations and Top 5 in 105 countries.