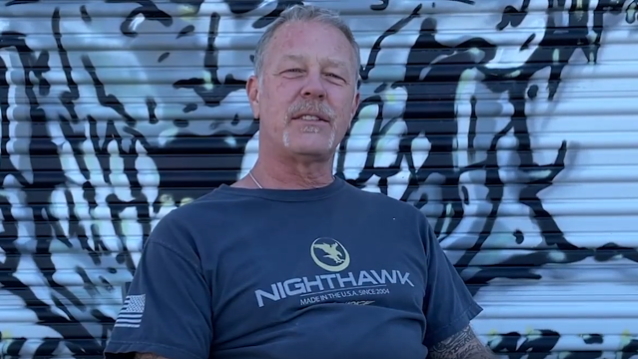 METALLICA frontman James Hetfield made an appearance during Little Kids Rock' annual benefit that celebrates the transformational power of music education on Wednesday, April 14. Presented by Hot Topic Foundation, the event featured musical performances, an online auction, speeches, and testimonials to celebrate the organization's mission of bringing free musical instruments and lessons to over a million students across the country while ensuring that musical support is available when students return to school. Usually held in person in New York City, the evening was livestreamed and emceed by music artist T-Boz of TLC and DJ Skee of Dash Radio.

In his pre-recorded appearance, Hetfield stated about his involvement with Little Kids Rock (as transcribed by BLABBERMOUTH.NET): "Music has saved my life daily. It has been a passion of mine since the early, early times. Music has been an outlet for me, it has been a connection, it has been a best friend for me for my whole life.

"Having an option for music, music at schools, I'm an advocate for having an opportunity and a place for people to at least explore that. And if they find it helpful, that's great. And it could turn out to be a wonderful career.

"I'm here as an example of how music has saved lives."

Little Kids Rock began as an informal effort by former schoolteacher Dave Wish to give his San Francisco Bay Area second grade students a music enrichment program. Borrowing from friends and scouring area flea markets for instruments, he began offering free after-school guitar classes. The curriculum Wish developed immediately captured each student's interest because it had them playing the types of music they enjoyed listening to, and enabled them to improvise and compose freely around a basic network of ideas and skills within minutes of picking up the instrument.

"We are humbled that so many incredible members of the artistic and business communities are coming together via this event to support our mission to bring more music to more kids," said Little Kids Rock founder and CEO, Dave Wish. "This school year we were inspired to see our teachers use music to keep their students emotionally close even when they had to be apart. Music has been and will always be one of humanity's emotional first responders."

Little Kids Rock uses genres including rock, pop, Latin, and rap to empower teachers across the country to build music programs as diverse as the students they serve. Students see themselves reflected in the curriculum, which strengthens their connection to their school, their peers, and their community. The organization also donates necessary instruments, and curriculum, which meet a key need of many school music programs. While the world of music expands through innovation, Little Kids Rock guarantees that music education does as well.

"Early music education is very important for the young," said Little Kids Rock national board member and longtime bandleader for PUBLIC ENEMY, Brian Hardgroove. "Not only is it a direct path to critical thinking; I believe it can also help a young person better understand the past that has led to their present. Music has always inspired and brought us together, and music will continue to inspire and bring us together."

More than 550,000 kids currently participate in Little Kids Rock programs nationwide. When the pandemic hit and schools began closing, the organization moved its professional development workshops to online and began creating new curricular resources focused on distance and digital learning. They pursued partnerships that provided free supplies such as JBL headphones to thousands of students in their homes and supported music teachers with online training, technology and the means to ensure their students did not miss a beat in their music education, whether they are learning virtually or in-person.

SPECIAL GUEST ANNOUNCEMENT! ⭐ #JamesHetfield of @Metallica is joining us at the Little Kids Rock Benefit on April 14!

Thanks to our generous sponsors, General admissions tickets are FREE! Register now: https://t.co/m03B9dj0FHpic.twitter.com/03e4YmOMn8