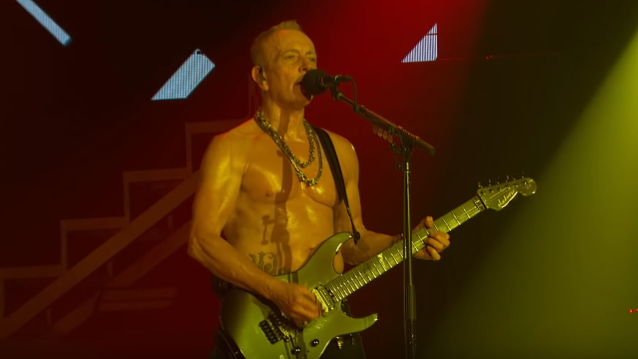 DEF LEPPARD guitarist Phil Collen, who is famous for playing gigs shirtless, told Inside Hook in a new interview that there is a simple reason for his penchant for showing off his rock-hard abs as often as possible. "I get hot on stage, but also I do look good," he said, laughing. "Maybe it's shallow, but that's okay. I'm a performer, musician and artist. And performing is this whole thing. On stage, I want to look like a rock star."

At 63 years old, Collen is a prime example of the "no-excuse" rule when it comes to being active, fit and healthy.

Collen stopped eating meat in the early 1980s and went vegan in 2011. He told the Los Angeles Times: "I always thought it was a bit weird eating dead bodies even though my parents said it was all right. But I saw 'The Texas Chain Saw Massacre', and that did it. In the movie, they're doing the same thing to people that they do to animals, and so I gradually got off eating meat.... The health thing came way later. Veganism came [10] years ago, and it was more of a health decision."

Collen told Inside Hook about his diet: "I got a phone app to count calories. Thankfully, I could eat as many veggies and as much fruit as I wanted. I didn't get cravings and I still had occasional cheat days."