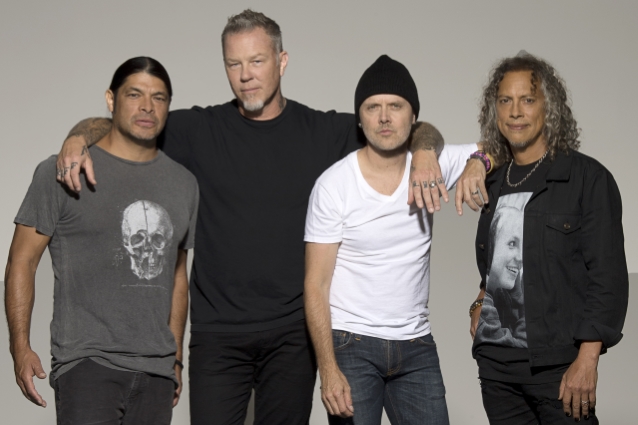 Prior to METALLICA's November 28 concert at Boise, Idaho's Taco Bell Arena, the four members of the band sat down for an interview with radio personality Big J of Boise station 100.3 FM The X.

This past May, the musicians promised to grant Big J an in-person interview if he lost at least 100 pounds by the Boise show.

Big J, whose real name is Jeremi Schlader, weighed around 424 pounds and chronicled his battles with the scale on social media.

Asked by Big J how they feel whenever a fan comes up to them and tells them that their music saved his or her life, METALLICA frontman James Hetfield said: "I know what they mean, 'cause it saved my life. So, yeah, join the club. [Laughs] But that is the ultimate connection, really — something that I've felt; some fear, some anxiety, some… whatever it may be. My viewpoint of the world, I think, it is totally off kilter, it's defective, and then when someone else comes up to you and says that, 'Hey, what you've written down or what you've created has helped me.' So that's more of a connection… It's like you haven't spoken any words; you've just felt what that person is feeling — even though it might be a different feeling. It's vague enough where they can totally dive in and say… And everyone loves it when someone's telling their story. Someone's saying, 'That guy is singing to me,' or, 'That song is about me.'"

Bassist Robert Trujillo added: "I think with music — I call it the ultimate conduit, so that it's the connector — and with music, and the magic of music, you're making people happy. I used to actually run in the mountains, train to METALLICA music back on the 'Ride The Lightning' album, so there's always a place for it, and it's almost always positive for most people. I would imagine it's helped you in your journey — our music — and it will continue to do that. Music is like magic in my mind — it's really special. And you're committed to music because of what you do and your job and your life."

Drummer Lars Ulrich weighed in: "I think, for me, the key thing is… nowadays… When people used to say that back in the day, we, or I, or most of us, didn't slow down long enough to take it in, or allow ourselves to take it in. And I think the key thing now is, 35 years into this crazy ride, hearing it and allowing ourselves to take it in, internalize it and kind of feel proud about that and feel that connection that James is talking to everybody, is really cool — is really cool."

Ulrich continued: "I don't wish to go back [and say], 'I wish we would have done that different 20 years ago,' but sometimes I just wish that at least I'd slowed down long enough back in the day to take a lot of that in. But we were always in such a hurry to get to the next thing, or whatever. So hearing that now… we do a lot of meet-and-greets and do a lot of interaction with fans on many different levels, and just that moment, that connection — whatever it is; everybody's got a different version of it — but it's always precious, and it's a real highlight of the day when we come and play shows."

Two months after Big J contacted METALLICA's management company pitching the idea for the weight-loss challenge, the band posted a video addressing his battle with the scale.

"Imagine being an alcoholic in recovery, but to stay alive you have to have a drink every day," he said. "Every meal's a challenge, and it's exhausting."