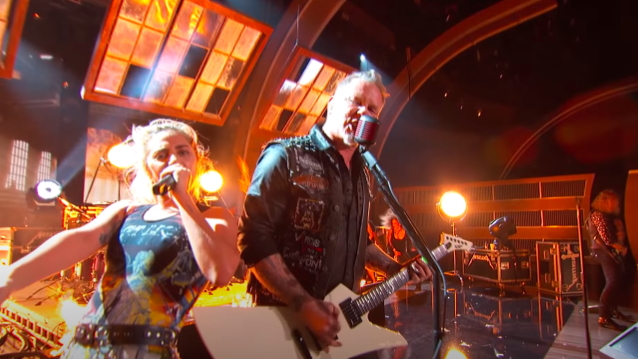 METALLICA's JAMES HETFIELD Praises LADY GAGA: 'I Just Respect Her As An Artist'

METALLICA's James Hetfield and Lars Ulrich still look back fondly on their collaboration with pop superstar Lady Gaga at the 2017 Grammy Awards.

"I just respect her as an artist," Hetfield said during an appearance Wednesday (August 12) on "The Howard Stern Show". "She was there for two hours before we even got there, working on her moves and thinking stuff up. She is extremely creative and a fearless artist."

Ulrich added: "Lady Gaga, in particular, she loves metal. She was telling me that 'Metal Militia', which is this deep cut on our first album 'Kill 'Em All', was her favorite song back in the day."

METALLICA's appearance with Gaga at the 59th annual event in Los Angeles turned into something of a disaster when the Grammy sound crew did not turn Hetfield's mic on, forcing him to share the mic with Gaga after the first verse and chorus of "Moth Into Flame".

James later told New York Post about the microphone malfunction: "I felt embarrassed. I haven't been that angry in a long time. When something out of my control goes wrong, I still get wound up. I'm sure it taps into other stuff from my past, but I felt helpless. It ended up being a blessing because I ended up singing in a microphone with Lady Gaga — maybe even more than she wanted. It felt more like a real collaboration because of that."

Hetfield told the Chilean newspaper La Tercera that he wasn't interested in collaborating with Lady Gaga again or another pop artist in some capacity. But, he said, "Even just talking with her, being around her, her energy was very, very exciting. She has lots of ideas, and she likes to push the boundaries like we do. So it was a good fit."

Shortly after the 2017 Grammy Awards, Ulrich told Rolling Stone that Gaga was the "quintessential perfect fifth member of [METALLICA]," saying, "Her voice, her attitude, her outlook on everything is so awesome. [The performance] was so effortless and organic and she just has the spirit of hard rock and metal flowing through her veins. It comes really easy for her. There's nothing contrived; she just has this super warm, easy energy."

METALLICA was up for a Grammy in 2017 for "Best Rock Song" for the track "Hardwired" from its latest album, "Hardwired... To Self-Destruct", but lost to the late David Bowie's "Blackstar".