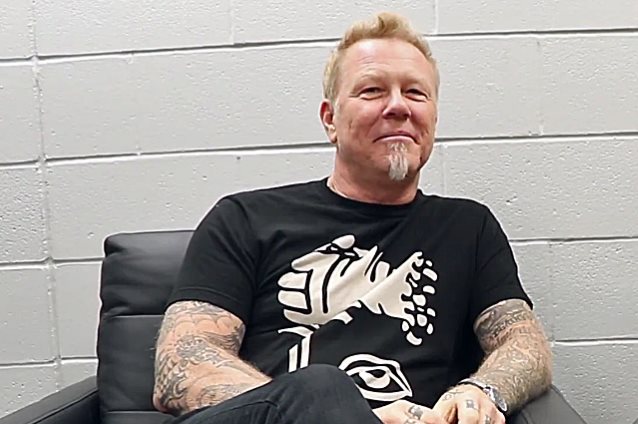 Elliott Fullam of Little Punk People conducted an interview with METALLICA frontman James Hetfield before the band's May 14 concert show at MetLife Stadium in East Rutherford, New Jersey. You can now watch the chat below.

Asked to name his favorite thrash bands that are not part of the so-called "Big Four" of 1980s thrash metal (METALLICA, SLAYER, MEGADETH and ANTHRAX),Hetfield said: "Oh, my God! There's tons of them. Well, EXODUS for sure. We grew up with those guys in the [San Francisco] Bay Area. Oh, and we stole their guitar player; that too. [Laughs] But, yeah, I think they're great. TESTAMENT… A lot of bands in the Bay Area, a lot of thrash stuff. I just think even before that… Yeah, there's thrash… Punk rock was kind of the beginning of it for me. MOTÖRHEAD — kind of thrashy but rock and roll. But I loved G.B.H., or still do, and I love DISCHARGE a lot. That's kind of really cool thrash music to me."

MEGADETH mainman Dave Mustaine in 2013 spoke to Radio.com about which band should have been included if the "Big Four" were expanded and considered the "Big Five". Mustaine said: "You know, people will say there's a whole another generation, like the 'Medium Four' [laughs], and I think there's a lot of great bands that fit that bill, too. But I think probably EXODUS, because there was nobody else at the time that had that kind of pull or that kind of importance in the metal community. Granted, it was with [late EXODUS singer Paul] Baloff, and Baloff had a voice that you had to have an acquired taste for, but you know, I liked him."

In a 2010 interview with Metal Asylum, EXODUS guitarist Gary Holt was asked if he feels the "Big Four" should have been expanded and considered the "Big Seven", including EXODUS, TESTAMENT and OVERKILL. "Well, I think it should be the 'Big Five' with EXODUS, because we were there at the start of thrash metal with METALLICA in the real early '80s," he said. "Same thing with MEGADETH because Mustaine was a part of METALLICA's birth and he also created MEGADETH. And SLAYER are SLAYER. ANTHRAX are also great and old friends, but if you listen to those first few records, they have definitely changed. TESTAMENT has every right to be part of the thrash metal legends, but it just came down to timing because they came later. And OVERKILL have been their since the beginning also. But I don't get hung up on that shit, because I know how it all started and I know where I was when the shit got created. We [EXODUS] certainly deserve to be part of the founding fathers, but you know who often gets excluded are the Germans — KREATOR, DESTRUCTION and SODOM. Everybody looks to America and forgets those guys. KREATOR, DESTRUCTION and SODOM all released records in the early '80s."

Back in 2014, METALLICA guitarist Kirk Hammett was asked by U.K.'s Metal Hammer magazine if it's strange to him how much METALLICA has eclipsed the other "Big Four" bands in terms of commercial popularity. "I try not to spend too much time thinking about stuff like that because whatever I think of is still not going to be a satisfying enough explanation," he replied. "It's just the way things are and how the chips fell. EXODUS in the '80s had some bona fide problems, but I think their first album [1985's 'Bonded By Blood'] is just as good as [METALLICA's debut] 'Kill 'Em All'. We were just playing the music we wanted to hear because no one else was playing it and it wasn't being played on the radio. It was only a small group of people who knew about it and it was almost elitist in that 'No posers allowed!' thing."