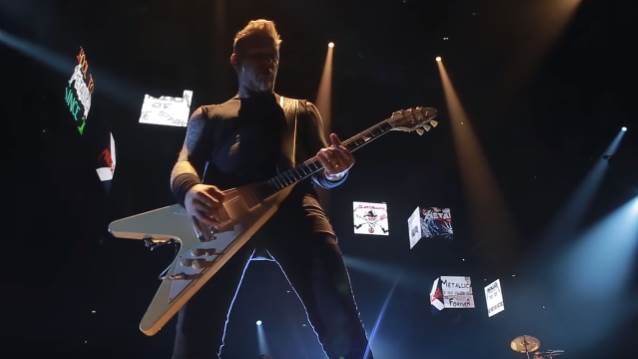 In the four-minute clip below, METALLICA frontman James Hetfield talks about his childhood love (or obsession!) with white Flying Vs and also takes a look at his new purple Snakebyte guitar.

"As most kids who love certain bands, you just wanna get the same guitar that guy is playing," James says. "I mean, really! I wanted a white Flying V forever — that was it. I mean, c'mon! The SCORPIONS, JUDAS PRIEST… It was a heavy metal guitar. You know, Michael Schenker — white V. It was my dream to have a white V. When I finally got a V, it was kind of weird to play. When you're standing with it, sometimes it rolls off you. And you've seen pictures of THE KINKS with a Flying V, and he's playing through the middle, holding it this way. It's, like, 'Wow! That's weird.' But actually, when you're sitting down with it, you've got the V down there, it's super easy. I loved the V shape once I got used to it."

Hetfield's main guitar for recording and touring behind METALLICA's debut album, "Kill 'Em All" was a white Flying V copy by Electra. James used this in the studio and live until the neck snapped and it was retired. That is when James moved to the Explorer guitars.