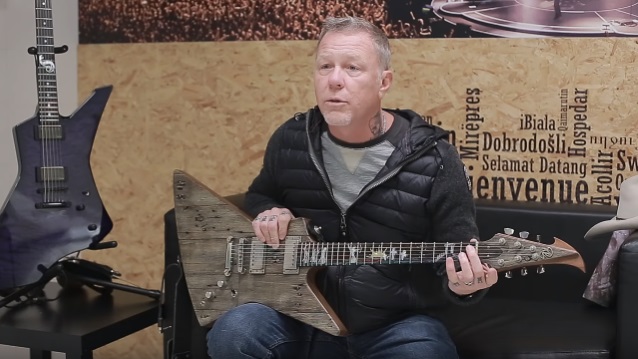 METALLICA has shared a story about 3132 Carlson Boulevard in El Cerrito, California, which was the band's home during its breakthrough years from 1983 to 1986. During this period, the group — which relocated to the Bay Area from Los Angeles to play with bassist Cliff Burton — rehearsed and wrote most of the songs for the albums "Ride The Lightning" and "Master Of Puppets" in the house's garage, which has since been torn down.

METALLICA frontman James Hetfield has revealed he used the wood from this famous garage to build a new guitar. Check out the clip below and hear him tell the story of how "Carl" came to be.

Author Joel Mclver's book "To Live Is To Die: The Life And Death Of Metallica's Cliff Burton" described a regular scene at Carlson Boulevard home while the members of METALLICA lived there: "It was a mess, because James, Lars and Mark Whitaker lived there and they would have these nightly drinking sessions. Everyone and their mother or father who was remotely interested in METALLICA would come over with a case of beer — and, of course, those guys wouldn't turn away any sort of strangers bearing gifts of alcoholic beverages."

METALLICA revisited its El Cerrito roots in April 2016 as part of a special weekend celebrating the reissue of the band's first two albums, 1983's "Kill 'Em All" and 1984's "Ride The Lightning".

METALLICA's "The $5.98 EP - Garage Days Re-Revisited" will be reissued on April 13 as part of Record Store Day. The long-out-of-print EP included five songs that were later released as a part of the "Garage, Inc." double album, but METALLICA thought it would be fun to bring them back now in the original format straight from 1987.

Keeping with the '80s theme, the remastered EP will not only be released as a CD and download, but also as several vinyl versions including a picture disc, as a cassette, and in a longbox (you youngsters can search the web for that term!). All Metallica.com pre-orders will receive an instant-grat single of the remastered version of "The Wait".