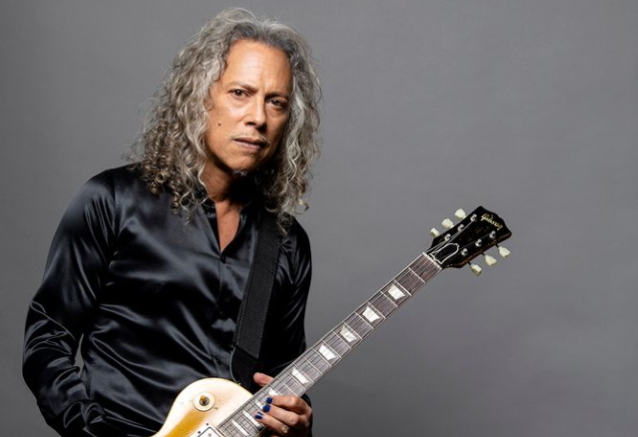 In a new interview with Kerrang! magazine, METALLICA guitarist Kirk Hammett spoke about the fact that he is currently involved in several projects outside his main band, including releasing his debut solo EP and publishing his first comic book, "Nights Of Lono". He said: "I have to say I've been sober for seven and a half years now and my mind is in a different place, I'm better focused. I got my brain back, I've gotten my memory back so nowadays I'm in a better place. I record music and my focus is that much better.

"When I got sober, I had so much more time," he explained. "[Prior to that] I was spending almost every night in a nightclub or bar and then I'd spend almost every morning recovering from that. Day in, day out, regardless of whether I was on tour or not. And now that's been removed from my life I have all this extra time, so of course I'm going to play my guitar more. It's what I love to do and as a consequence of that there's just a higher output. My rate of production is higher and it's a better model for me to work from.

"It's weird, I'm 59 years old and I don't think I've even peaked creatively or musically. I certainly don't feel 59, I still go out and surf three or four times a week, run, ride my bike and play my guitar. I still feel as energetic as I've ever been and I attribute that to giving up drinking. And this is all the result of that."

Hammett's "Portals", an all-instrumental four-song EP, was released on April 23 digitally and on CD and "ocean blue" vinyl for Record Store Day. The effort was recorded in Los Angeles, Paris, and Oahu and was produced by Hammett, who drew inspiration for the songs from horror movies, classical music, and the work of Ennio Morricone, whose "The Ecstasy Of Gold" has been opening METALLICA live shows since 1983.

Born in San Francisco in November 1962, Hammett quickly found himself obsessed with watching monster movies and reading books and comics. Transitioning through his teenage years meant taking up guitar and teaching himself how to play by ear for hours on end.

In 1979, Hammett named and founded the metal band EXODUS. After recording a three-song demo in 1982, Hammett was called out to New York to audition for METALLICA, and by the time "Kill 'Em All" was released in July of 1983, he was officially part of the METALLICA plan for world domination. Adding his style and passion into the mix helped define and shape the sound of METALLICA as they grew into the band they are now, and Hammett's solos and signature licks have inspired a legion of musicians young and old.