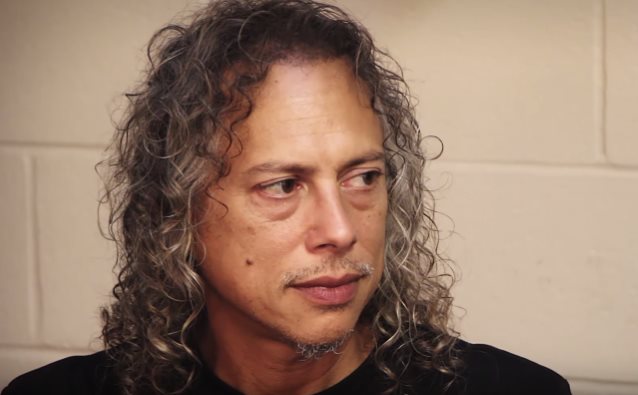 In a new interview with the Vancouver radio station CFOX, METALLICA's Kirk Hammett spoke about the experience of getting taught how to play guitar by Joe Satriani more than three and a half decades ago.

Hammett recalled his first lesson with Satriani, saying: "It was actually very poignant. His first lesson to me was, 'Learn your lesson. Don't waste your time, don't waste my time. I expect you to know everything that I gave you in a week's time.' I was, like, 'This guy is serious.' But you know what? I did it, and he kicked my ass. But after a while, I was taking two lessons a week from him. I became so thirsty for what he had to offer me, I was just, like, 'Bring it on! It's all making sense. I wanna learn more.'"

Hammett went on to praise his former teacher, saying: "I have to say, Joe Satriani has always played that way. Ever since I first met him, he's always played incredibly — with all the sounds and all the bar stuff and tapping and crazy licks that no one's ever played, and still probably never plays. I mean, he's just such a unique individual as a musician."

Satriani was equally complimentary of Hammett's abilities during a 2016 inteview with Classic Rock magazine. Recalling the future METALLICA guitarist as a "young kid full of talent and enthusiasm," Joe said: "Kirk was a great student. He was very eager to learn. His fingers moved great — and he had great taste in guitar players like Michael Schenker and Uli John Roth. He was completely musical."

Hammett had been playing in the Bay Area thrash band EXODUS, but Satriani recalled that Kirk suddenly was asked to join METALLICA. "He disappeared for a few months then came back with a copy of 'Kill 'Em All'," Joe said. He added that he helped Hammett figure out the key centers for his solos in some of METALLICA's songs.

"Thrash metal songs had brand new chord progressions that had nothing to do with blues, ZEPPELIN or THE BEATLES," Joe explained.

"Kirk would come in and say, 'Check out this new song I have to solo over — what key is this in?' Often the song wasn't in just one key. I had to teach him to decipher the song's tonality, to understand the musical possibilities, and how to make his own decisions on what to play."

Satriani said he could hear Hammett begin to use more exotic scales as METALLICA's career and music advanced. "But every now and again he’ll still play a solo that sits on top of the riff — the one from 'Sad But True' echoes the early Kirk Hammett," he said.

"Even after all these years, his finger tone's still the same. He burst on to the scene with that sound and throughout METALLICA's musical journey, his solos come up big, thick and full of energy."