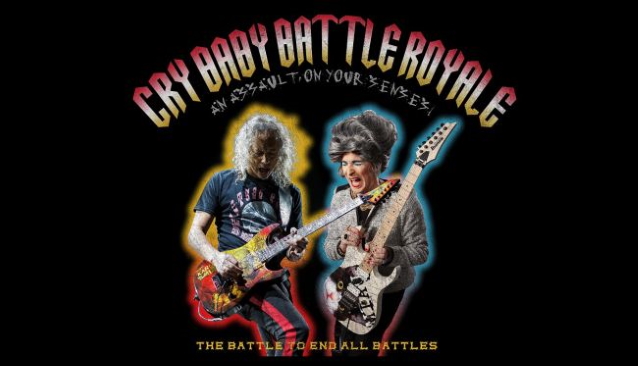 Kirk Hammett's long-professed his love of the wah-wah pedal will be challenged by Mrs. Smith, the guitar virtuoso alter-ego of actor-musician David Hanbury, at the "Cry Baby Battle Royale" on March 8 at the Senate in Columbia, South Carolina. The event will also include a performance by the METALLICA guitarist's THE WEDDING BAND covers project, also featuring his METALLICA bandmate Robert Trujillo and UGLY KID JOE singer Whitfield Crane, among others.

It was in January 2019 that Mrs. Smith first threw down a gauntlet before Hammett, saying in an interview with "The Mark Agnesi Show": "I'm the number-one wah-wah abuser. I abuse the wah more than Kirk Hammett and I've challenged him multiple times to a wah-off. Why are you hiding behind your wah-wah pedal, Kirk Hammett?"

Legendary guitarist Joe Satriani, who famously gave guitar lessons to Hammett in the 1980s, has voiced his support for Mrs. Smith, telling Rolling Stone: "This is the crux of what makes Mrs. Smith so funny: There's this woman, who doesn't look right, who's doing this stuff in the wrong place, in a cabaret or on a street corner and yet is out-shredding the person who is totally dedicated to shredding, who's got the pants and the hair and the right amp and the pointy guitar."

"To me, the wah-wah is a lot like the human voice," he said. "It isn't so much about the 'wah-wah' sound, it's being able to manipulate the tone however I feel it in that moment. It actually creates a better connection to the deeper part of me. And [Jimi] Hendrix wasn't actually the first person I heard use a wah-wah pedal — that was Brian Robertson from THIN LIZZY." Recalling that life-changing moment, he went on: "The first time I became aware of it was the song 'Warriors' on 'Jailbreak'. He comes in with this totally wah-ed out two-three notes, and I said to my friend, 'What is that?!' He said, 'That's a wah-wah pedal.' 'Wow, fantastic!' I made a mental note of that…"

‪KIRK HAMMETT VS. MRS. SMITH‬ ‪CRY BABY BATTLE ROYALE‬ ‪March 8 at The Senate in Columbia, SC‬ ‪ ‬ ‪Who would dare challenge the status of @KirkHammett as King of the Cry Baby Wah Pedal? His reign has long been undisputed and recognized by millions of fans the world over, not to mention Wah manufacturers, @jimdunlopusa, who feature a Kirk Hammett Signature model. Last year, the gauntlet was thrown down by a most unlikely challenger... Mrs. Smith! New York City-based philanthropist, emerging guitar goddess, and lover of all cats (as well as some people),@smithcatmrs has dared to proclaim that she is, in fact, the #1 Abuser of the Wah. Kirk has accepted her challenge, and now these two will finally go head to head (foot to foot?) in a Cry Baby Battle Royale for the ages on March 8th at The Senate in Columbia, SC! Get tickets for this once in a lifetime showdown now! LINK IN KIRK’S BIO #CryBabyBattleRoyale #WAHOFF #kirkhammett #smithcatmrs‬

Tonight!!!!! The triumphant return of #TheMarkAgnesiShow with my guest the incredible @smithcatmrs. Click the link in my bio to subscribe now!!!! The ball is in your court @kirkhammett