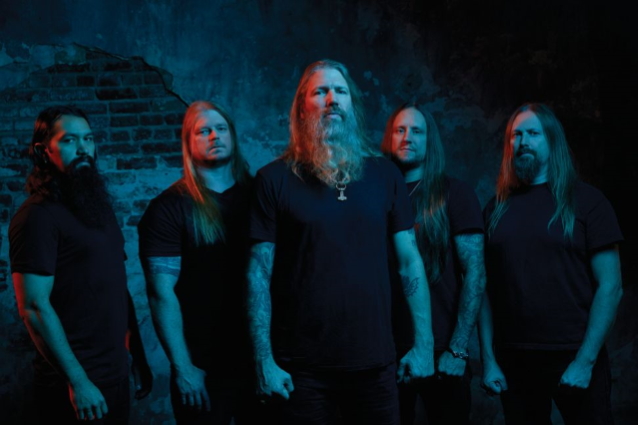 "Berserker", the new standalone mobile game from heavy metal Vikings AMON AMARTH in conjunction with Swedish video game developer/publisher Ride & Crash Games AB, is a mini adventure in the AMON AMARTH game series, which first came to life in 2017. Set on the shores of England, as Thor you must defeat four types of ferocious enemy and overcome a mighty boss challenge to seize victory and free England from its evil King.

The game will be available from February 21, priced $4, from the iOS App Store and Google Play as well as Ride & Crash Games AB online.

Grab your hammer and historically inaccurate horned helmet, it's time to crush your enemies! You control Thor, the God of Thunder, in a brand new mobile gaming adventure set in the AMON AMARTH game universe. This time he's heading towards mother Earth to fight the evil King of England.

Embark on a perilous journey through seven new levels, set on the shores of medieval England, where danger never sleeps. Knights, archers, cavalry, and crucifix-wielding monks will try their best to stop Thor in his tracks. Show them the hard way why that is a huge mistake! Battle your way through seven levels to the final boss challenge! Can you save England from its evil King? To keep the game from aging like spoiled mead, there are also 30 new and challenging possible achievements to push you to the limit — and keep you coming back for more!

Who is the fastest in the land? Who slays the most priests? Fight your way to the top and win exclusive AMON AMARTH merchandise. The competition will start with the game's release on February 21 and continue until April 30. On April 30, you will be judged! What rank will you have earnt against your fellow gamers? The top 100 performers will receive prizes! Prizes may include limited game merchandise such as a specially designed AMON AMARTH t-shirt, a signed mini poster, or other glorious trophies for you to display with pride.

Of course, every battle needs a rousing soundtrack, so this game features three battle-ready AMON AMARTH tracks from their latest album "Berserker", newly remade in an old-school retro style for your pagan pleasure.

Even if you've already experienced the AMON AMARTH gaming universe and consider yourself a master of wielding thunder and lightning, there are surprises to discover. Unlock new hammers and try out the fire, ice, or wolf hammer to see which suits you best! Your ultimate goal is to strike as much fear in the hearts of your enemies as possible. There's also a brand new power attack! Thor is indeed the God of Thunder, but now he is also the God of Berserkers! Unleash a whole band of them when the going gets tough, and laugh wickedly as you watch your enemies get ripped to pieces by your new allies.

Make haste, time is of the essence! Your mission is at hand: Grab Mjölnir, blast AMON AMARTH, save England!

Calling all Berserkers! This Friday, February 21'st, a new mini adventure in the Amon Amarth mobile game will be released as a stand alone application on iOS App Store and Google Play. Make sure you get it and compete for awesome prizes! Sign up to our mailing list at amonamarth.com for more info ⚔️🛡