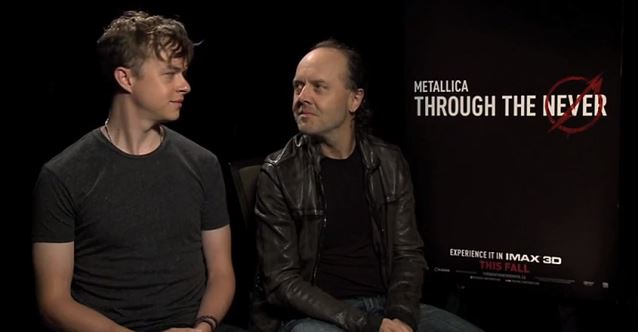 Jake Hamilton of "Jake's Takes" traveled to Toronto, Ontario, Canada to talk with Dane DeHaan and METALLICA drummer Lars Ulrich about METALLICA's new movie, "Metallica Through The Never", which made its world premiere Monday night (September 9) at the 38th annual Toronto International Film Festival. The film, a blend of concert movie and fictional narrative, stars Dane DeHaan as a member of METALLICA's road crew who is sent on a mysterious mission while the band performs at a sold-out arena and events outside grow more bizarre. You can now watch the chat below.

METALLICA reportedly spent $20 million of its own money to make the film, which will also play at Fantastic Fest in Austin, Texas several days before it opens in limited release on IMAX screens around the country on September 27. The film will then expand to more theaters on October 4.

"There was a lot of times in this movie where we're like, 'No way, we can't do this. Let's just pull the plug," said METALLICA frontman James Hetfield. "From the money it's gonna take to make this thing, how long it's gonna take to even break even; our kids could still have the bill for this thing."

A review of the film by Dennis Harvey of Variety can be found at Variety.com.