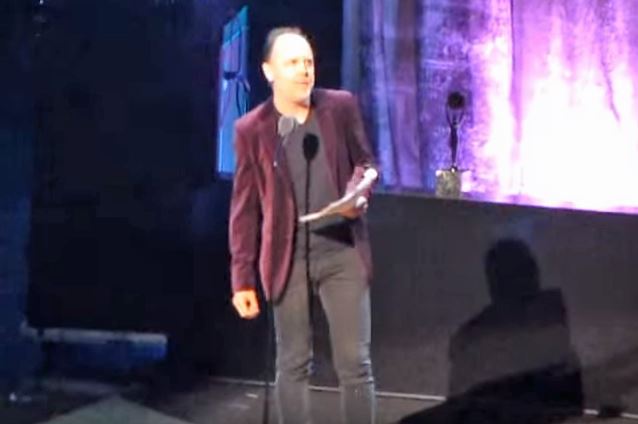 METALLICA drummer Lars Ulrich finally got a chance earlier tonight (Friday, April 8) to induct classic heavy rockers DEEP PURPLE into the Rock And Roll Hall Of Fame. PURPLE has been on the ballot three times and Ulrich has been championing their inclusion for years,

Ulrich gave a passionate speech in which he praised the British hard rock legends for achieving fame "the old-fashioned way: They worked hard; constant touring, making an album a year, sometimes two — never giving a shit about image or critical acclaim. And in the golden age of rock and roll debauchery, they were known primarily for their music and in the sex-and-drug sense, they were reportedly gentleman through and through. In fact, if you must dig, the main dirt on DEEP PURPLE was the revolving door on personnel. Ten different band members in the first seven years, Fourteen in total."

The drummer went on to single out DEEP PURPLE's musicianship as one of the main reasons for the band's success. He said: "These guys could play. They could improvise. They were in constant and curious cutthroat competition with each other to take the music some place new, some place unknown and never ever the same place twice."

Ulrich also credited DEEP PURPLE for being an early influence on METALLICA while chiding the Rock Hall for taking so long to induct the group. He explained: "With almost no exceptions, every hard rock band in the last 40 years, including mine, traces its lineage directly back to BLACK SABBATH, LED ZEPPELIN and DEEP PURPLE. And as far as I'm concerned, these three bands should always be considered equals for their songwriting, their recordings and their accomplishments. Where I grew up, and in the rest of the world outside of North America, all were equal in status, stature and influence. So in my heart — and I know I speak for many of my fellow musicians and millions of PURPLE fans when I confess that — I am somewhat bewildered that they are so late in getting in the Rock And Roll Hall Of Fame."

Video footage of Ulrich's speech can be seen below.

Photos of the induction ceremony can be found at Newsday.com.

Highlights from the event will be broadcast on HBO on April 30.

Lars Ulrich from Metallica giving the most passionate induction speech for Deep Purple at @rock_hall. #RockHall2016pic.twitter.com/yxCaAXtobF

Deep Purple is in the Hall of Fame. #2016Rockhallpic.twitter.com/KCs5wNwH23