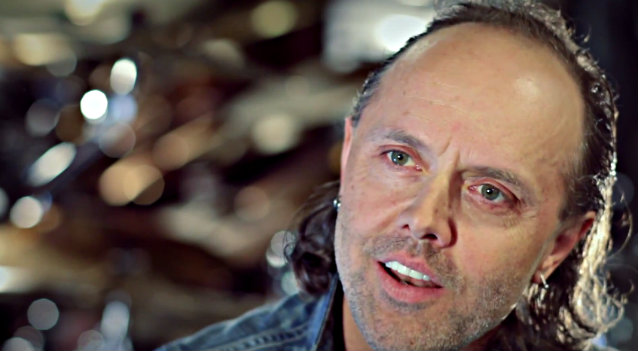 METALLICA drummer Lars Ulrich has spoken further about the negative feedback to the band's upcoming headlining appearance at the U.K.'s Glastonbury festival, which will be the first time in the event's 44-year history that a metal act has topped the bill. Asked about the response, Ulrich told Metal Hammer, "To be totally honest, I don't know how serious I can take all of it. I don't sit glued to the iPad following whoever is the next person who has an opinion about METALLICA. I know that almost on a daily basis there is some musician somewhere who gets asked what he thinks about Glastonbury and METALLICA, and I find the good in that — that after more than thirty years, we can still get talked about. I guess it's fun that you can still make some waves, without doing anything other than saying yes to an invitation to a festival. So, happy days!"

According to The Pulse Of Radio, Glastonbury is a very laid-back type of festival, with more of a hippie/indie vibe than most, which is why there has been so much controversy over METALLICA playing the show in the first place.

"First of all, it's the one festival that's eluded us over the years, so it's nice that they have decided to finally invite us," Ulrich told Metal Hammer. "And, you know, it's not exactly like it's our first dance on this particular floor. There are, I think, sixteen European festivals that are similarly to Glastonbury — festivals that sell out the day the tickets go on sale, six months before any bands are even attached to play. That's a festival environment that we've been playing in for years, all over Europe. So, you know, this is not a new concept. [laughs This is just the first time that this is happening in England for us."

Ulrich also laughed off the suggestion that METALLICA would be nervous about playing to a potentially hostile audience, telling Metal Hammer: "I think we thrive in those situations where get a chance to go out and show ourselves to people who may not be super-familiar with us. When that happens, people have a tendency to walk away with a smile on their faces — including the band members. So I'm not nervous, no. I'm looking forward to it and I think it's going to be good."

A petition was launched online last month calling for the removal of METALLICA as Glastonbury headliners after it was announced that frontman James Hetfield will be hosting a new series about bear hunting on the History channel. In addition, drummer Martin Bulloch of Scottish post-rock icons MOGWAI described METALLICA as "shite," while multi-instrumentalist Barry Burns added: "I can't wait to hear that guy [referring to Ulrich] play the drums again — unbelievably bad."

METALLICA will close the show at Glastonbury on Saturday, June 28. Other headliners include ARCADE FIRE and KASABIAN.