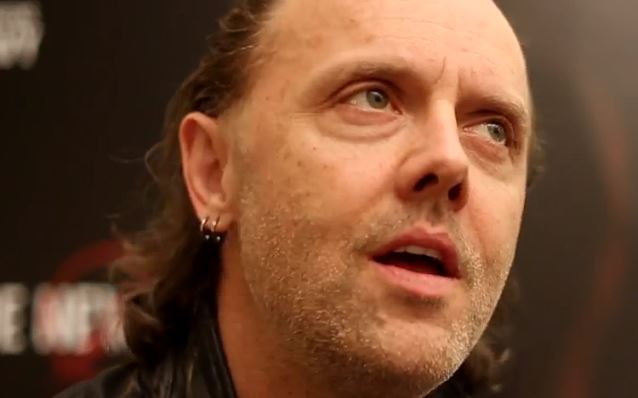 METALLICA's LARS ULRICH On Next Album: 'I Wish We Were Writing More'

On May 28, METALLICA drummer Lars Ulrich was interviewed for BBC Radio 1's "Rock Show" with Daniel P. Carter in Helsinki, Finland. The chat, which aired this past Monday, can be streamed using the audio player below. A couple of excerpts follow (transcribed by BLABBERMOUTH.NET).

On METALLICA's current tour of Europe:

"We're doing the 'By Request' thing, which we haven't done in Europe; tonight's the first show of that. And the Finns have been very persistent in voting in a particular song — somehow they got a petition going and got people to vote for a song that we've never played live called 'The Frayed Ends Of Sanity'. So everybody's very excited about us performing a song tonight we've never played live. It's never been performed live. There aren't many of those, [laughs] especially from the early records. There was one a couple of years ago called 'Escape' that we played from the 'Ride The Lightning' album the first time about two summers ago. And tonight, the world premiere of 'The Frayed Ends Of Sanity', live and direct from Helsinki, Finland."

On whether he was surprised by the setlists that have been voted by the fans for the "Metallica By Request" tour so far:

"We did a 'By Request' rundown in Latin America in March, and there are patterns that you can pick up. There are certainly geographical patterns. Like, the 'St. Anger' album was really big in both Germany and Scandinavia, and there are 'St. Anger' songs at every show in Germany and, I think, one in Denmark and maybe one in Sweden. Lima, Peru was the first time in as long as I can remember that we didn't play 'Nothing Else Matters' 'cause it wasn't voted in. I think we played, like, four 'Kill 'Em All' songs that night. So it's fun. Between me and you and the four walls of the camper that we're sitting in here, it's not quite as varied as I had maybe expected. It's good and bad. And I say this… It's not bad bad bad. It's not as varied as I expected, which is good, because it solidifies the fact that the setlists that I've been writing for the last 10 years are kind of right in line with what people want. There are certain songs that, obviously, are, sort of, the cornertstones of our live set, and even though we haven't played the same setlist in over 10 years, there are certain songs — 'Master Of Puppets' or 'Sandman' or 'Sad But True' or 'For Whom The Bell Tolls' — they are the ones that are, sort of, right at the top of every setlist. So that solidifies, kind of, what we do. Now the bad thing — and I say 'bad' very loosely, very loosely — the bad thing is that I change the setlist… We have about, probably, 60 songs that we can, sort of, rotate more or less at any given moment, and so I often will put six to eight different songs in from night to night just to kind of vary it, mostly for ourselves. There are some of the nights that are surprisingly close to the previous night or to the next gig. So if you look at, for instance, this run, I think on this run we're doing 26 songs and we have 18 slots every night. Which means that… Like, if this was a 'normal' run, we would probably do 40 songs over eight shows. Do you know what I mean? It's not quite as varied as it is when I write the setlist, because we go into and play the kind of obscure songs like… I don't know… 'Through The Never' or 'Carpe Diem Baby', or that kind of stuff. So it's just fun. And what you always wanna do, whenever we go out and play these festivals and do this stuff, you always wanna make it different. So each appearance, or whatever, is different, and it keeps us on our toes, and hopefully it keeps the fans, sort of, interested. So it's different. And ultimately, it's for the fans by the fans. The only thing I do is sequence the setlist."

On how the songwriting process for METALLICA's next studio album is going:

"It's good. I wish we were writing more. But we always end up doing this, then we've gotta do this, then somebody says this, then we've gotta rehearse 'The Frayed Ends Of Sanity', and then we'll go play this thing for… We did a thing for Ozzy, kind of a tribute to Ozzy a week ago. And all these things always happen. And the word 'no' is not one that we're very good with. So people [say to us], 'Come and do this.' 'OK, we'll be there.' And then all of a sudden, it's, like, there goes all the writing for that week. But it's slogging along. Right now there's nothing on the calendar at all from mid-August… we have a one-off in Montreal… but from mid-August for the rest of the year, there's nothing on the calendar, so hopefully we can get a good 60 hours in a week and just get in there and just hit it."