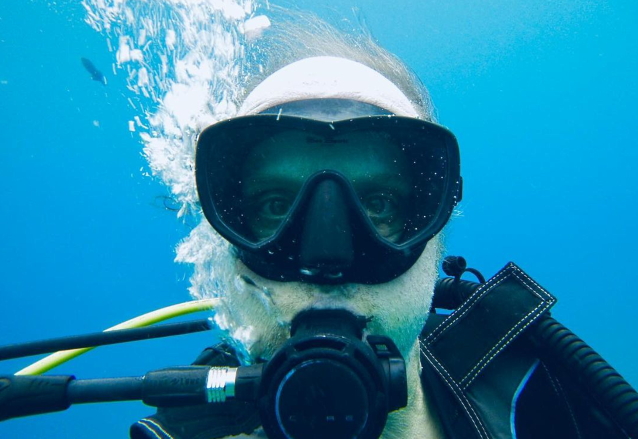 METALLICA's Lars Ulrich has poked fun at his receding hairline while sharing a new photo on Instagram.

Late Saturday night, the drummer posted what appears to be a selfie of him scuba diving, and he included the following caption: "Mega Danish forehead still shines bright at 50 feet under water..."

Back in 2013, Ulrich said that he didn't mind people filming his diminishing hair. While discussing METALLICA's warts-and-all documentary film "Some Kind Of Monster", which was released in 2004, Lars said: "There was always this open door kind of thing. So, if the door's open, its wide open so come in and be part of it, warts and all. Film away and we have nothing to hide, the receding hairlines and everything else, it's all part and parcel of the package, It's the way we do things around here and we're proud of that. It's not like, this is what we do when we are METALLICA, and this is what we do when we're not METALLICA. There's not multiple personalities, or multiple worlds or whatever."

Last week, METALLICA celebrated the 35th anniversary of its classic third album, "Master Of Puppets", by performing the song "Battery" on an episode of "The Late Show With Stephen Colbert".

In January, Ulrich told Classic Rock that METALLICA was making "glacial" progress on the follow-up to 2016's "Hardwired… To Self-Destruct" album. Two months earlier, Ulrich said in an interview with Rolling Stone that METALLICA was nearly a month into "some pretty serious writing" sessions for its next studio album. That same month, Lars told Kara Swisher at the CNBC Evolve Summit that he and his METALLICA bandmates have been working on new music for "the last six [to] eight weeks virtually." But he admitted that they have encountered a myriad of technical issues which have slowed their progress.