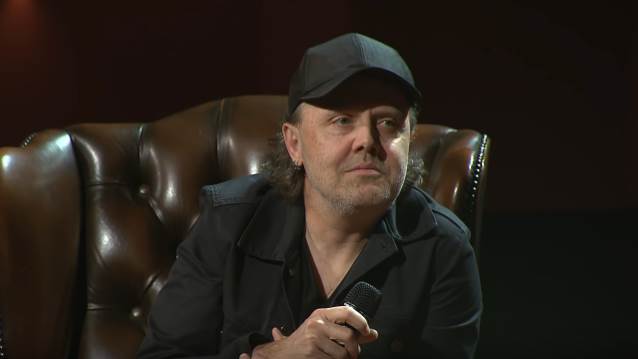 The day before METALLICA was honored with the prestigious Polar Music Prize on June 14 in Stockholm, Sweden, the band's drummer, Lars Ulrich, was interviewed by music journalist Jan Gradvall. During the hour-long chat, which can be seen below, Ulrich spoke about METALLICA's beginnings back in the early 1980s, their musical influences and long and sucessful career. A couple of excerpts follow (transcribed by BLABBERMOUTH.NET).

On the first time he met METALLICA frontman James Hetfield and how the band was formed:

Lars: "[My family] moved to Los Angeles, to Newport Beach, a suburb down in the south, and I was gonna play tennis on the local high school team there. There was an Australian tennis player named Roy Emerson who was close with my dad, and he had a son named Anthony Emerson, and he was the star tennis player at Corona Del Mar high school. And I was gonna come in and be the number two player at Corona Del Mar high school. In Denmark at that time, I was kind of ranked in the top 10 in the country and blah blah blah, and I was gonna come to Newport Beach and be with Anthony Emerson on this tennis team. Except the problem was that when I tried out for the high school team, I wasn't one of the seven best players in the school. And I wasn't even one of the seven best players on the street I lived on, I think. So, literally, in one day, the whole tennis dream just crashed — crashed and burned hard — and music was waiting in the wings to take over. There was a 7-Eleven [store], and 7-Eleven had a local classified ads newspaper called the Recycler, or it was available at all 7-Elevens. And you could buy and sell cars and lawnmowers and kitchen appliances or whatever. And in the very back, there was a small section about musicians looking for bands and bands looking for musicians. So I put in an ad saying, 'Drummer looking for other heavy metal fans,' or whatever, 'to start band. Influences: DIAMOND HEAD, ANGEL WITCH, TYGERS OF PAN TANG and VENOM' or something. And I would get all these calls from these guys saying, 'I'm into heavy metal. I like STYX and I like KANSAS and I like VAN HALEN' or whatever. And, 'Who's DIAMOND HEAD?' Then we would sort of have that conversation. And then I went and tried to play music with a bunch of these people and none of it worked out. And then one day, there was a call from a guy called Hugh Tanner, who had said if he could bring a friend of his along, and we met up and played music for an afternoon. And the guy that he brought along was James Hetfield. [James was] very shy, super introverted, could barely look you in the eye, barely have a conversation. But there was some connection with him as we were playing. And even though nothing happened that day, I ended up being kind of frustrated with the whole thing. And now it was June of 1981, so I went back and spent the summer in Europe and hung out, spent some time in England with DIAMOND HEAD and MOTÖRHEAD and so on. But when I came back to America in October of that year, I called up that James Hetfield guy again, 'cause there was just some vibe, a connection. And I said if he wanted to get together and see if there was a possibility of something, and we hooked up. And 37 years later, I'm sitting here. He was at that time… I came from a cultured European upbringing, was an only child, very close to my parents — my parents were my best friends at the time. And he was the exact opposite — the classic American rebellious, sort of 'Fuck my parents, fuck society, fuck The Man' — that whole thing… I think his father took off… not exactly sure when, but I know he was very disconnected from his father and he was raised by his mother who then got cancer when he was 14 or 15. And because of the particular Christianity that they believed in, they were not allowed to seek medical help. So, basically, I think over the course of a year and a half, he watched his mother pass away right in front of his eyes. So that, obviously, had a significant impact on him. I met him, I think, about a year after that — maybe he was 17 or 18. [He was] painfully shy and awkward. But we connected over music and we sat up in my room in Newport Beach and listened to, like I said, TYGERS OF PAN TANG and GIRLSCHOOL and SAXON and ANGEL WITCH, and all these things, and he loved all that stuff. He grew up more on American [artists like] AEROSMITH and Ted Nugent and that kind of stuff. But we found a common language and a common thing that we could both feel connected to and identify with. And we started playing songs together. Most of the songs we started with were covers of New Wave Of British Heavy Metal songs that were very off the radar, because we wanted to start playing concerts right away. So we figured if we learned a set… A lot of bands in the bars and the clubs at that time were playing KISS songs and JUDAS PRIEST songs, or whatever, so we figured we would play some covers, but not songs that people knew. And then we would take our time and start writing our own songs later."

On the change in METALLICA's musical direction with the 1991 self-titled fifth album, commonly known as "the black album":

Lars: "[METALLICA's co-manager] Cliff [Burnstein] and I went under the bleachers in Toronto. We were playing with AEROSMITH. It was the summer of 1990, and it was the very end of the 'Justice' cycle. It was James, me and [Cliff], and we went under the bleachers at the CNE [Stadium] in Toronto in the summer of 1990. And we had finished the 'Justice' cycle and we sat and told Cliff that we felt that we had pushed the progressive side of METALLICA… The last song on the '…And Justice For All' album was a song called 'Dyers Eve', which is five minutes of, basically, what we jokingly call 'math metal.' So we found, as we were going along on that tour, as the audiences became bigger and bigger, that some of the crazier, 10-minute progressive songs felt like they were connecting less and less with the audience. And we felt that we had, from a creative point of view, pushed… Where do you go after 'Dyers Eve'? It's, like, you have reached the end of that — there's nothing beyond that. So we decided that we were gonna try to take… We creatively wanted to take a turn. And so we figured that simplicity and trying to be a little more cohesive… we needed to do something else. And… we did. And then we made the 'black album' with [producer] Bob Rock and then all of that happened. We felt like we were on a creative journey that — and we've always felt like we've been on a creative journey that always needs to be reinvigorated, reinvented. And I think we, as people, have a fear of repetition, or fear of being stuck. And maybe even to the point where you could argue that we fight it too much. I think we may have made a couple of turns at some point that were almost too much, just because we don't wanna be fucking trapped in what people want from us, what the community expects from us. And we are so fiercely independent and autonomous, and nobody's gonna hold us back, and we're just gonna keep changing it up all the time. But this record really was a reflection on… I think if you look at the first four records — 'Kill 'Em All', 'Ride The Lightning', 'Master Of Puppets', '…And Justice [For All]' — there was a natural progressive growth and evolution that just came to an end point at the end of the '…And Justice For All' album. And the only place forward, other than repeating yourself or getting stuck in that moment, was to do something completely different, and that's what we did for the next couple of years."

METALLICA was awarded the Polar Music Prize at a ceremony where Ulrich and bassist Robert Trujillo watched GHOST frontman Tobias Forge, along with members of Swedish metal act CANDLEMASS and the duo VARGAS & LAGOLA, honor the band with a performance of the METALLICA classic "Enter Sandman".

Swedish singer Loney Dear performed "Wherever I May Roam" and "No Leaf Clover", while REFUSED frontman Dennis Lyxzen and ex-MOTÖRHEAD drummer Mikkey Dee covered the song "Whiplash". Reading the citation for METALLICA were DEEP PURPLE's Ian Paice and Roger Glover.

Ulrich and Trujillo accepted the prize from His Majesty King Carl XVI Gustaf of Sweden. In his acceptance speech, Ulrich said: "Who would have thought, when METALLICA started this musical journey 37 years ago, that one day we would be standing in front of both musical royalty and actual royalty, accepting one of the most prestigious prizes that can be bestowed upon musicians."