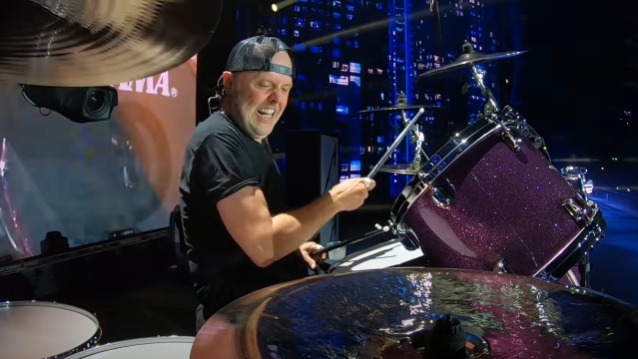 During an appearance on yesterday's (Thursday, May 19) episode of SiriusXM's "Trunk Nation With Eddie Trunk", METALLICA drummer Lars Ulrich discussed the band's plans for the coming months. He said (as transcribed by BLABBERMOUTH.NET): "We just got back from [playing for] three weeks in South America. I'm still decompressing. But oh my God, to be back out there playing and actually touring — most of what we did in the fall were one-offs and scattered festivals — but to be back out there [for] three weeks, an incredible run down in Chile and Argentina and four shows in Brazil, and getting a chance to play, interacting with the fans and all that was just incredible. Next weekend we've got the BottleRock festival up here in Northern California and then straight across the country to Boston Calling on Sunday and then the week after that we head to Europe and do almost a month worth of festivals and shenanigans. The best time to tour in Europe is definitely June and July — everybody's out and it's light and it's warm and people are out and about and just going to festivals and celebrating music and summer and the whole thing.

"Obviously, just to get out of the house and get amongst it again is a huge thing," he continued. "So we're very excited about the summer. Like I said, the three weeks down in South America were incredible. We're getting deeper and deeper into… I think we played over 30 songs across the shows down in South America. So we'll keep getting deeper into the records and finding nuttier songs to play into the catalog and so on. So it's fun. I'm happy to be out there."

In February, METALLICA announced it will perform only two U.S. summer stadium shows in 2022: Highmark Stadium in Buffalo, New York on August 11, and PNC Park in Pittsburgh, Pennsylvania on August 14. Both shows will feature special guests GRETA VAN FLEET and ICE NINE KILLS.

Formed in 1981 by Ulrich and guitarist/vocalist James Hetfield, METALLICA has become one of the most influential and successful rock bands in history, having sold nearly 120 million albums worldwide and generating more than 15 billion streams while playing to millions of fans on all seven continents. The band's several multi-platinum albums include "Kill 'Em All", "Ride The Lightning", "Master Of Puppets", "… And Justice For All", "Metallica" (commonly referred to as The Black Album),"Load", "Reload", "St. Anger", "Death Magnetic" and "Hardwired... To Self-Destruct", released in November 2016 and charting at No. 1 in 32 countries.