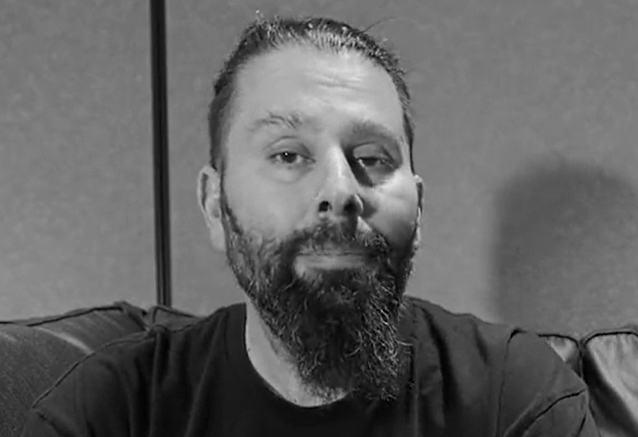 DEFTONES guitarist Stephen Carpenter has pulled out of the band's upcoming European tour.

The Sacramento, California-based act, which is currently finishing up a North American run of shows, is set to kick its European trek on June 4 in Germany.

Earlier today (Friday, May 20),Carpenter posted a video message on Twitter explaining that he will not be joining his DEFTONES bandmates for those international shows and revealing his temporary replacement.

Stephen said: "Hey, everyone, it's Stef. As much as I would love to be on the road with my brothers right now playing for all of our incredible international fans, I have chosen to remain playing domestically for now. With everything going on in the world, I'm just not ready to leave home or the country yet. But for now, our great friend from Sacramento, Lance, will be fulfilling my duties. Give him some love. Have a great time. I wish I could see every one of you. Thanks for your understanding."

Lance Jackman is known for his work in Sacramento bands EIGHTFOURSEVEN, HORSENECK and WILL HAVEN. Jackman has been playing second guitar on DEFTONES' current U.S. tour, which launched on April 14 in Portland, Oregon.

In late 2020, Carpenter faced widespread criticism for the remarks he gave during a guest appearance on the conspiracy theorist podcast "Tin Foil Hat With Sam Tripoli", in which he voiced his support for the widely debunked "flat Earth" conspiracy theory and disputed the effectiveness of vaccines.

DEFTONES singer Chino Moreno later attributed at least some of Carpenter's views to his marijuana use, saying during an appearance on the "Peer Pleasure" podcast: "The weed probably has a 'lil bit to do with his conspiracies and this and that… sitting at home, just looking on whatever sites he looks at. Probably doesn't help being smoked out."

Moreno went on to say that his friendship with Carpenter is strong despite their drastically different worldviews.

"When we're together, it's like we don't even talk about any of that stuff," he said. "We play music, we laugh, we have a blast playing music. Still friends the way we were when we were kids. But it's not like I haven't heard him go on his tangents before… I'll listen for two minutes and then I just can't. 'Cause he'll just go off into no man's land."

Two months ago, longtime DEFTONES bassist Sergio Vega confirmed his exit from the band, just days after a new photo of the DEFTONES without him emerged online on various digital service providers. At the time, he took to social media to share a video explaining his perspective on the split. In the Instagram video, Vega detailed the contractual issues that created a rift between himself and the group's core members.

DEFTONES recruited Fred Sablan as their new touring bassist following Vega's departure. Sablan made his live debut with the DEFTONES in Portland.

DEFTONES released their most recent album, "Ohms", in 2020.