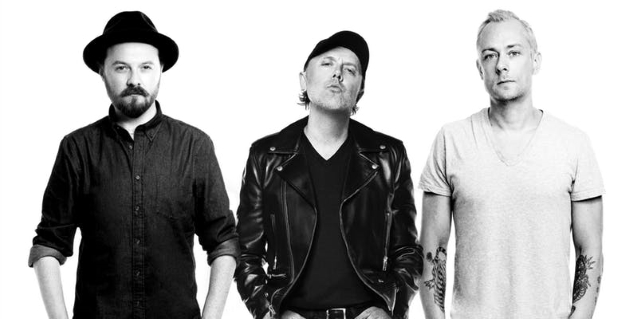 Join METALLICA drummer Lars Ulrich as he sits down with photographers and METALLICA collaborators Herring & Herring for an intimate conversation at The Great Hall at Cooper Union in New York City on Friday, October 19. The event is free and open to the public. General public should reserve a space here. Please note seating is on a first-come basis; an RSVP does not guarantee admission as events are generally overbooked to ensure a full house.

Photography duo Herring & Herring — a.k.a Dimitri Scheblanov, a 2005 graduate of The Cooper Union's School Of Art, and Jesper Carlsen — will be in conversation with Ulrich to discuss their collaborative work together, the process of creating art, and more.

Since their first shoot with Lars in 2014, Herring & Herring have photographed METALLICA on multiple occasions, most notably for their 2016 platinum-selling album "Hardwired… To Self Destruct", providing photography and creative direction for the album cover art, as well as directing music videos, shooting band portraits and capturing their live shows.

Scheblanov and Carlsen co-founded Herring & Herring in 2008. The duo's photographic approach is based upon conceptual and aesthetic exploration; continuously pushing the boundaries of storytelling through an ever-expanding visual vernacular, creating arresting images which bring personality, humor and sarcasm to the world of fashion and celebrity photography. As part of their partnership, they publish and photograph a self-titled image-only magazine built around unique creative collaborations with their celebrity subjects. The publication is as much akin to a highly curated art exhibition as it is to a lifestyle magazine and can be found on newsstands worldwide. In 2017, Herring & Herring were named Hasselblad Global Ambassadors.