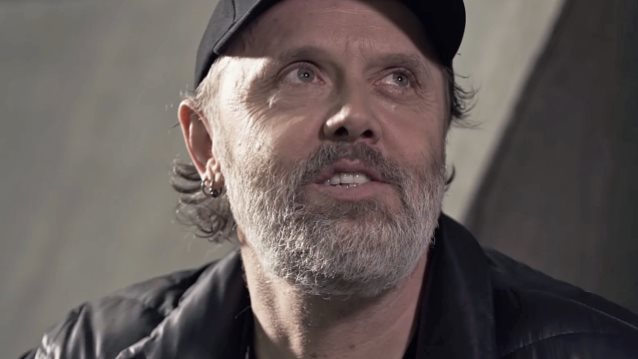 METALLICA's LARS ULRICH: We've Embraced All The Music Streaming Options Out There

Dickerman of the WJRR 101.1 radio station in Orlando, Florida recently conducted an interview with METALLICA drummer Lars Ulrich. You can now listen to the chat below.

Asked about the main difference between METALLICA releasing all of its recordings on its own independent label called Blackened Recordings compared to being signed to major labels in the '80s and '90s, Ulrich said: "More work. [Laughs]" He added: "Over the years, the idea of having our own label, owning our own records, sort of controlling all that, not having to play second fiddle to a record company with potentially a different agenda, us controlling everything that we do means that we feel that we have kind of a direct line to our fans and the fans have a direct line to us and they know that there's no ulterior motives and no other entities involved. You know, 'money has to recouped,' or there's a certain amount of records that have to be sold to meet some goals or all that nonsense."

Lars continued: "We started very early on — I guess in the mid-'90s — the goal, the carrot on that stick was to try to get all our masters back and get control of all our records and all that. And it's just one more way that we can be independent, autonomous, float around in our own little world, do our own little thing and know that the fans and us have a very direct link to each other and that we're free from the corporate policies.

"We've always had a great relationship with most of the people at our record companies and so on, but obviously doing your own thing gives you just that total freedom, and I think that most of the fans really appreciate that. But within the band, it's certainly more to look after, or to manage, and we've had to hire a bunch of our own people and all that type of stuff, so it's kind of been a little more overwhelming than when you have a record company do most of the groundwork. But it's a good problem to have."

Ulrich also talked about his views on music streaming, seventeen years after METALLICA's decision to launch legal action against Napster in 2000, claiming that the pioneering music file-sharing service was illegally allowing users to download the band's tracks without paying royalties to the group.

"We've embraced all the streaming options out there," Lars said. "I mean, we love our Apple Music, we love our friends at Spotify, we love all the rest of 'em out there. At the end of the day, you wanna connect with your fans, you wanna get your music out there. Obviously, METALLICA fans have many different ways that they get music and receive music, so our thing is to try to get that to them in as many ways as possible."

He continued: "The whole issue from, I guess, seventeen years ago was not really about the digital element; it was about who controlled the digital element. And so now that we control all of it ourselves, it's not really a question. Spotify and Apple Music and all the rest of 'em are great ways to get our music out there, and I have Apple Music and Spotify right on the very front screen of my own phone, and I use both of them. So it's cool."