METALLICA's Minneapolis Stadium Concert Sells Out In Less Than 10 Minutes

Pre-sale fan club tickets were made available earlier this week, followed by this morning's public on-sale, which sold out in less than ten minutes.

METALLICA's show in Minneapolis will be the first rock concert at U.S. Bank Stadium, the new home of the Minnesota Vikings, as part of the opening weekend festivities.

AVENGED SEVENFOLD will provide direct support, marking one of only a few shows the hard rock band will play in the country this year. VOLBEAT will open the show with their unique blend of rock, metal, and rockabilly.

METALLICA drummer Lars Ulrich said, "We had such an amazing time playing in our hometown stadium the night before the Super Bowl that when asked we couldn't say 'no' to another chance to be part of a very special weekend."

AVENGED SEVENFOLD singer M. Shadows said, "Opening the new U.S. Bank Stadium would be an honor all on its own but having the opportunity to play with the mighty METALLICA makes this a must see event. We've been cooped up in the studio for over a year and can't think of a better way to bust out than with all of you in Minneapolis."

The members of METALLICA have often joked that they'll play anywhere, but frontman James Hetfield told The Pulse Of Radio a while back about the one venue he won't play — a cruise ship. "That's a whole other level," he said. "Trapped on the ocean somewhere? [Laughs] There's already enough craziness that happens on cruise ships already. I'm not going on a cruise anytime soon, with or without the band!"

METALLICA continues to work on its tenth studio album, which may or may not be out by the time the band opens the stadium in Minneapolis.

METALLICA guitarist Kirk Hammett told Alternative Press earlier this month that the band had "pretty much" hired "Death Magnetic" engineer Greg Fidelman to produce its new album, saying, "We have not brought in any (other) producer and it looks extremely (unlikely) we'd bring one in this late into the project." 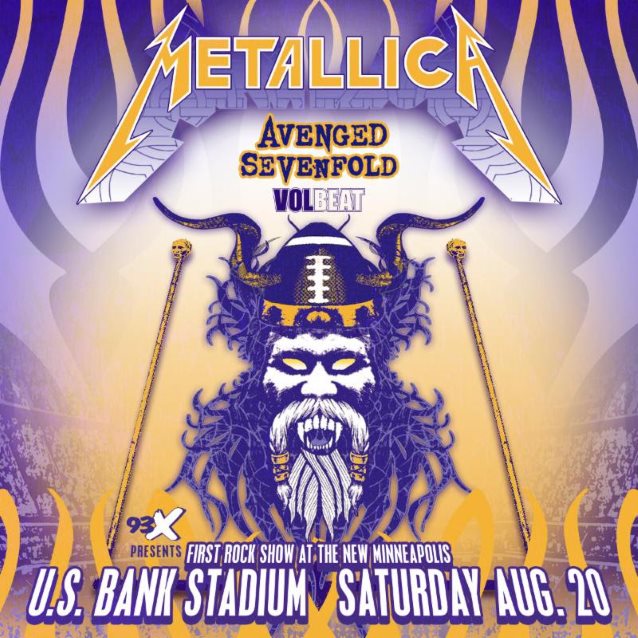