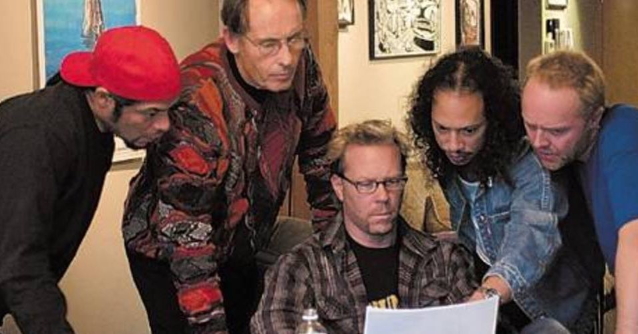 METALLICA's Onetime Therapist PHIL TOWLE: 'I Have Such Deep Love And Respect For The Band, The Guys And Their Families'

METALLICA's "performance coach" Phil Towle, a former psychotherapist who was brought into the picture in January 2001 to help James Hetfield, Kirk Hammett and Lars Ulrich repair their relationship with Jason Newsted, was recently interviewed on "Speak N' Destroy", a podcast about all things METALLICA, hosted by longtime journalist and METALLICA fan Ryan J. Downey. You can now listen to the lengthy chat below.

Asked what the "common" thing is that METALLICA fans say to him when they approach him after recognizing him in public, Towle said (as transcribed by BLABBERMOUTH.NET): "It's really hard to say. The people that don't come up to me that are pissed off at the way that I am in the movie, there are probably a lot of those people. Nobody's trashed me directly that I can remember. But the people that ask the questions, pretty much the thing they say is they thank me for being a part of the process.

"I have such deep love and respect for the band, the guys and their families. I mean, they're just amazing human beings — every bit as sharp and as wonderful as you would imagine them to be, with their own personalities. So I love them dearly, and their families and stuff. So the memories of that experience, when somebody asks me, I know how important it is for the fans who are so dedicated, because they've been so moved by METALLICA. Just to be in a concert and watch on side stage and see people respond to them, there's a kind of loving devotion that is not… How should I say it? Sometimes you see a crowd like that being able to be grateful for its capacity to be angry, or the capacity to just say, 'Fuck it.' Whatever. And I get that. But there's such a loving admiration for them. That just reinforces the force of love and how important that is.

"To see them at end of a concert, arms around each other, that's what it's all about. So the fans feel that. The music lives on because of the relationship between the fans and the passion about what METALLICA does with them and for them and METALLICA's appreciation for the fans. They're very devoted to their fans; they care deeply about their fans. And that's the kind of thing that comes up for me when somebody comes to me. It's, like, 'Wow. I'm honored that you came up to me to thank me for my participation with a revolution with some people who have changed the world.' They've drained a puss for a lot of people, given an outlet for a lot of people with their anger and frustration, but they've also spread the love."

Newsted's exit from METALLICA was documented in the band's 2004 documentary, "Metallica: Some Kind Of Monster", which followed the members of the group through the three most turbulent years of their long career, during which they battled through addiction, lineup changes, fan backlash, personal turmoil and the near-disintegration of the group while making their "St. Anger" album.

While initially helping METALLICA towards restoring band harmony, the film shows Towle attempting to increasingly insert himself into the band's creative process, submitting lyrics for the album and even attempting to join them on the road. "Some Kind Of Monster" also documented Hetfield's spiral into alcoholism and decision to check himself into a rehab facility. Hetfield's re-emergence from rehab is when the film really gets into gear, with the chief worry in his mind whether or not he could do METALLICA sober.

Last year, Ulrich told Rolling Stone magazine that METALLICA might not be around today if it weren't for Towle. "It was a difficult time with Phil," he said. "And as easy of a target as he is to make fun of, whenever I get asked about it now, I find myself defending him. He did save the band. I think you and I wouldn't be sitting here talking to each other if it wasn't for him."

He continued: "It was a very transitional, experimental time. We'd been a band for 20 years, and we realized we never had a fucking conversation about how we're feeling, what being in METALLICA is doing to everybody. It was just this fucking machine. And then Hetfield had to go away and deal with some of his issues, and then that opened up this whole thing."

In a 2004 interview with The Kansas City Star, Towle spoke about the scene toward the end of "Some Kind Of Monster" documentary where he and James and Lars get into it over Phil's continued role with the band. Asked what happened there, Towle said: "The band was going through a moment of indecision about whether to continue with me and on what terms. I needed an answer. I said I gotta know because I'm thinking about moving out here. Off camera we had talks about continuing. So I really felt a little ambushed. I felt I'd had one understanding where I'd do it part time to resolve some issues. But it was also difficult for me to think about leaving. … I was with this one client every day for almost two and a half years. We started with two- and three-hour sessions, and then when things heated up as they made the album, I was in the studio every day. I just didn't want to leave the process, the intimacy. And I thought we had a deal in place. But, you know, the thing to come out of that was Lars coming to James's support. That really cemented things between them."