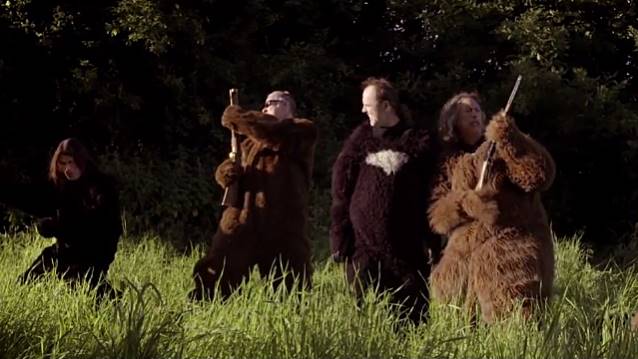 METALLICA's appearance Saturday night (June 28) at Glastonbury festival marked the first time in the U.K.s event's 44-year history that a metal act has topped the bill.

The heavy metal giants faced much controversy when they were first announced as headliners — drawing criticism for frontman James Hetfield's apparent support of bear hunting and with many arguing that the band had no place at Glastonbury, a very laid-back type of festival, with more of a hippie/indie vibe than most.

Indirectly responding to a petition launched last month calling for METALLICA's removal from the festival, due to Hetfield hosting a new series about bear hunting on the History channel, METALLICA took to the stage last night to a Julien Temple-directed intro video showing a traditional British fox hunt where all four bandmembers played hunt saboteurs, disguised a bears, and killing hunters. The eight-minute video, which can be seen below, was soundtracked by SWEET's glam rock classic "Fox On The Run" and included a clip of the the classic film "The Good, The Bad And The Ugly", in tribute to actor Eli Wallach, who died this week. (METALLICA has used the song "The Ecstasy Of Gold" from "The Good, The Bad And The Ugly" as prelude music at the band's concerts since 1985 and recorded a version of the instrumental for a compilation tribute to composer Ennio Morricone.)

METALLICA used the platform at Glastonbury to encourage the festival organizers to book more metal bands. Hetfield said after playing "For Whom The Bell Tolls" and "Wherever I May Roam", "We're very proud to be here and to be representing, shall we say, the heavier side of music.

"Me and the boys would like to dedicate this song to everyone here who's been waiting for someone like us and also to all the heavy metal British bands who have ever dreamed or are still dreaming of playing here."

The band played a 90-minute set, which included many of the METALLICA classics such as "One", "Master Of Puppets" and "Enter Sandman". During the encore of "Whiskey In The Jar" and "Seek And Destroy", the band launched dozens of black METALLICA-branded weather balloons into the audience, triggering a giant game of dodgeball between the audience and security guards, according to BBC News.

"METALLICA. Glastonbury. Together at last," Hetfield said at the end of the band's performance. "That felt good. You made us feel so good. Thank you for having us."

Taking the microphone, METALLICA drummer Lars Ulrich added: "There's no place on this earth like this beautiful Glastonbury festival. Thank you for letting us be part of your experience and we hope to see you one more time."

Speaking to the BBC's Jo Whiley backstage after METALLICA's set, Ulrich said: "That was sensational. I don't remember much of it... the energy was fantastic."

Asked to describe his Glastonbury experience in one sentence, Ulrich simply said: "Other-worldly."

Glastonbury organizer Michael Eavis praised this year's festival as a "great success," saying METALLICA had played "like their lives depended on it."

Helen Langton from Stratford-upon-Avon told Reuters after METALLICA's performance: "I was not a fan, but I might be now," adding that they were "brilliant, amazing."

METALLICA's setlist for the Glastonbury festival: