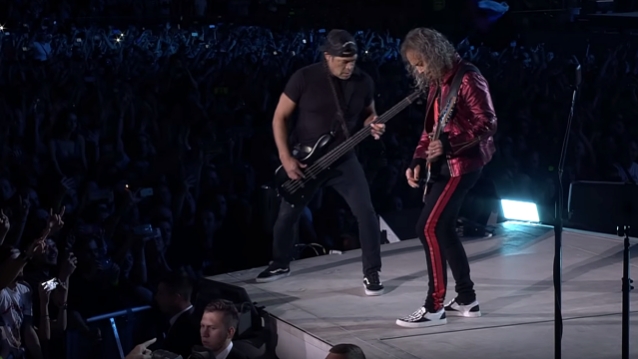 METALLICA has uploaded several videos spotlighting the so-called "doodles" from the band's recent shows in Tartu, Estonia; Copenhagen, Denmark; Hämeenlinna, Finland; Trondheim, Norway; and Moscow, Russia. Check them out below.

"Doodle" is the fun and unusual feature METALLICA added to its shows on the band's last few tours: at each stop, guitarist Kirk Hammett and bassist Robert Trujillo have been covering songs from some of their musical heroes — often choosing songs that are far removed from the band's traditional metal sound. The "doodles" have been showing up right before Trujillo's solo on "(Anesthesia) Pulling Teeth". The songs are pared-down interpretations — just bass and guitar and sometimes Trujillo singing in front of music stands.

According to Billboard's Boxscore data, the summer 2019 leg of METALLICA's "WorldWired" tour grossed more than $70 million from 13 shows. The highest-earning date ($8,194,075) took place on June 8 in Meath, Ireland, where a near-capacity crowd of 71,122 saw the band perform at the iconic venue Slane Castle. The second-biggest concert ($6,745,329) happened on July 6 in Berlin, Germany, where 68,452 fans were packed into the sold-out Olympiastadion.

The group's 21 North American "WorldWired" arena shows during the reporting period grossed a total of $41.7 million, good for an average per-show gross of $1.99 million. With an average attendance of more than 16,000, the band moved nearly 350,000 tickets altogether.