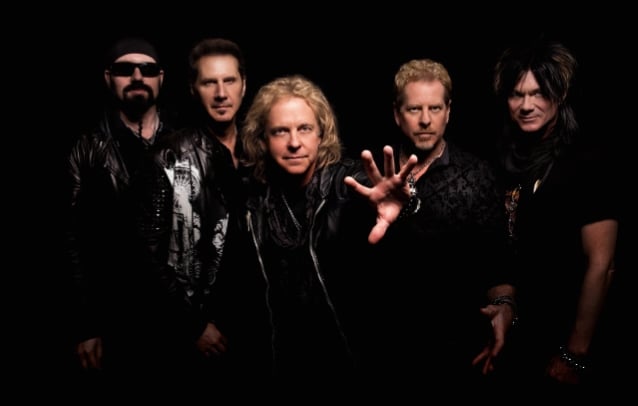 NIGHT RANGER's JACK BLADES On Touring With SAMMY HAGAR's THE CIRCLE: 'After That, We Had To Practically Go Into Rehab'

NIGHT RANGER bassist/vocalist Jack Blades recently spoke with the "Music Mania" podcast. The full conversation can be streamed below. A few excerpts follow (as transcribed by BLABBERMOUTH.NET).

On the band's work ethic:

Jack: "Bands like FOREIGNER and us and STYX, all of us, when we get out there, we give 110 percent. None of these bands have slowed down one bit, which is pretty amazing after so many years of being in the business and everything like that. You know what it is? It's the love of music. It's the love of playing in front of an audience. It's the love of rock 'n' roll, and I think that keeps us all going. Look at THE ROLLING STONES — I'm trying to figure out which show I can go to."

On the group's upcoming tour of Japan, where the group will perform their classic albums "Dawn Patrol" and "Midnight Madness" in their entireties:

Jack: "I think personally, between DAMN YANKEES and NIGHT RANGER, I've been to Japan about... I've been on tour there probably 16 or 17 times. We've played tons of shows. NIGHT RANGER started out in 1983 going to Japan, and we've done really, really well ever since. All these shows, we're doing our first two albums, 'Dawn Patrol' and 'Midnight Madness', in their entirety, start to finish, exactly like they're on the record. These shows in Tokyo and Osaka all sold out, [so] we had to add another show. It's really fun. I'm looking forward to it. We're really excited about it."

On the band's current outlook:

Jack: "We just enjoy playing right now, and we're so thankful that so many people are coming out to the NIGHT RANGER shows. It's almost like so many of our songs have ended up being in, like, the collective consciousness of the nation, whether it be '(You Can Still) Rock In America', 'Sister Christian', 'Don't Tell Me You Love Me', 'When You Close Your Eyes', 'Goodbye', 'Sentimental Street'... all those songs, it's so gratifying to know that when you're sitting in your bedroom writing a tune, that 30-something years later, people can still relate to it and still enjoy hearing it. I think that's a real wonderful thing. We feel very blessed."

On the musical relationship between him, guitarist Brad Gillis and drummer Kelly Keagy:

Jack: "We did, like, a month's worth of shows with Sam in May and June. We've known Sammy forever. Our first tour was with Sammy Hagar, when we released our first album in 1983. He was doing his 'Three Lock Box' tour, and he put us on... We've known Sammy for so long that it's just a blast. We have so much with them. Those boys are drinkers, man. Them boys know how to drink. After that May/June tour, we had to practically go into rehab. Mike Anthony and Sammy, those boys know to pack them away... The fun never stops when you're around Sam."

On the group's future plans:

Jack: "There's always going to be music floating around in the heads of the guys in NIGHT RANGER, and there will always be new music that we'll play and always create. We have a philosophy — once you stop creating, that's when you start dying inside. We're just going to keep rocking and creating new music and keep doing it and doing it and doing it. That's how you keep alive. It's like a shark — when sharks stop swimming, they die. With NIGHT RANGER, [if] we stop creating, that's when the whole thing will just come to a screeching halt. In the meantime, we're just going to keep writing songs, getting ideas together, putting ideas together, putting songs together, and when we feel like we've got the right move, we've got the right motive, we've got the right feeling and everything like that, then we'll maybe go in and cut another record. But until then, we're just going to keep touring and rocking and doing what we're doing... When you're sitting there and you hit the first notes of the piano of 'Sister Christian' and 10,000 people just come completely unglued, and you have 10,000 people singing 'Motorin'...', you've got to be a jaded asshole not to feel that. Every time that happens with us, it's like we're playing the song for the very first time. It's the fans — it's the audience — that keep us all going, and that's what keeps us wanting to play more, to do more, to give more... That's why we continue to do what we do, and we're going to keep giving them everything we've got."

NIGHT RANGER's most recent album, "Don't Look Back", was released in 2017 via Frontiers Music Srl.