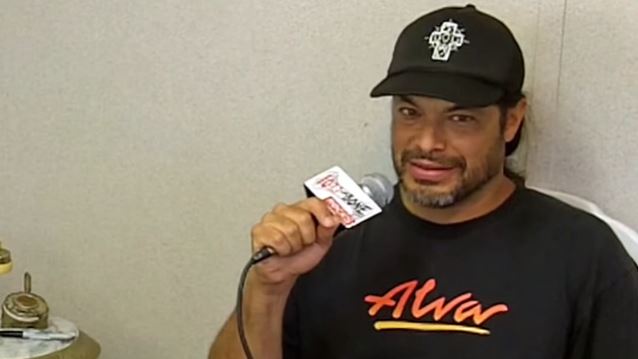 Chasta of the San Francisco, California radio station 107.7 The Bone spoke with METALLICA bassist Robert Trujillo at this past weekend's Lollapalooza festival in Chicago. You can now watch the chat below.

Asked where his his infamous "crab walk" came from, Trujillo said: "That came from [playing with BLACK SABBATH singer] Ozzy [Osbourne]. I was on tour… It was, like, the first or second show… I think it was actually the second show that I ever did with him, in Las Vegas, I remember… And we were playing [BLACK SABBATH's] 'Sweet Leaf', and he was going up to everybody and getting in our faces — in a good way — and challenging us in different ways, with stage movements and stuff. So I just started doing this weird sumo [kind of thing]… People started calling it the 'crab walk,' so I guess we'll roll with that… I threw that at [Ozzy], and he did it with me, and I started laughing; it was so much fun. And we've been doing it ever since… but not together anymore. Hopefully he's still doing it. I don't know."

Regarding what it was like playing with Ozzy, Trujillo said: "[Playing with] Ozzy was a dream come true. We all grew up with BLACK SABBATH. I mean, there's no secret there. Any of us, any of the members of any band I've ever been in, or anyone I've ever worked with. I still play BLACK SABBATH songs. I jam with my buddies in MASS MENTAL and we play 'War Pigs', we play… 'Fairies Wear Boots'… and we love it, man, I'll tell you… 'till this day. So, SABBATH is always some of the best music ever. And the reason is because it grooves, it's funky, it's heavy, it's got lots of great changes, twists and turns. It can be fast, it can [have] just nice, slow, powerful riffs. And the melodies are really, really important, too — they're beautiful. So playing with him was a dream come true. I was in a party band in the early '80s and we played SABBATH and Ozzy songs, as well as RUSH and VAN HALEN… all that kinds of stuff. So playing with him, again, was, like, 'Wow! Is this reality?' And that's part of why I was laughing — because I'm doing this 'crab walk,' and I've got Ozzy, the guy that I didn't think was a reality… He's godlike to me; he's untouchable. There he is doing the 'crab walk.'"