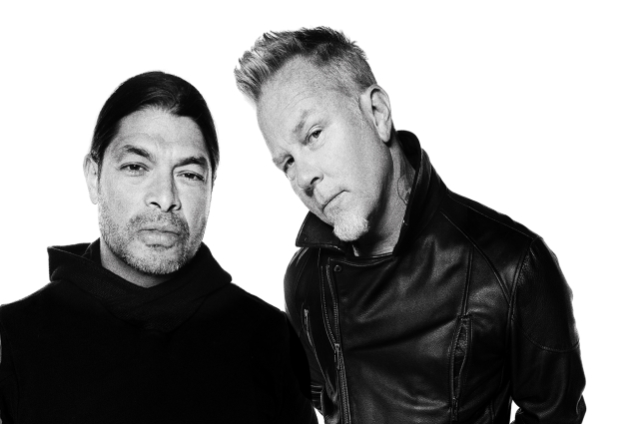 METALLICA bassist Robert Trujillo is the featured guest on the latest episode of "The Ex-Man With Doc Coyle", the podcast where BAD WOLVES and GOD FORBID guitar player Doc Coyle talks to professionals in the music world and other creative industries about the challenges and transitions of leaving monumental ventures.

Speaking about the importance of getting along with your bandmates, Trujillo said in part (as transcribed by BLABBERMOUTH.NET): "Any situation, people that are coming up and doing bands, never get caught up in the idea that you're in your band and you're safe and nothing can touch you. Anybody can be replaced. And you wanna always try to be as respectful as possible. Because you're gonna have your ups and downs and you're gonna bump heads — that's a given — but it doesn't mean you quit or you hate the person or whatever.

"I've always been in situations in my groups where there were those moments where things get heated and you're bumping heads. It happens in METALLICA. There's been a couple of times, even with James [Hetfield, METALLICA frontman]. James is a little… Maybe something's bothering him… I remember one time a few years ago — about three years ago — in Italy. Poor guy, he got stung by a bee in his face, I think it was. I don't think he's allergic, but there was poison oak going on. So your face is hurtin', your body's itchin'. You're out there on the road. It's raining. We were in Italy or something. And one of the songs — like 'Memory Remains' or something… I had a lot in my head. Kirk [Hammett, METALLICA guitarist] and I were doing these duets and I'm singing in other languages. And Lars [Ulrich, METALLICA drummer] threw, like, 'Do a bass solo,' kind of a day before. And I'm just, like, 'Aaaargh…' So I'm tense. And [James is] tense too, but we're tense about different things. And we're going on stage very soon and things are running late. And we're playing 'Memory Remains' [in the tuning room], and I'm just kind of jamming through it, but I'm not really jamming through it with full intensity; I'm just kind of ghosting it a little bit. And he's, like, 'You know the song?' And this is a song we've played thousands of times. And I was insulted, because this is one of the easiest songs we play, and you're asking me if I know the song. So I'm just kind of, like, 'Yeah, I know the fucking s…' I blew a fuse for a second. And then I felt horrible, and he felt horrible. And then we realized, I think, that I'm tripping on the load that I have on my shoulders over here; he's tripping on this and this and probably… I mean, I get it, man — I've had poison oak; I've had bee stings before, and it ain't fun. And you're out there and you're trying to be the best you can. So, rather than throwing your instruments down and coming to blows or anything like that, you work it out — you kind of calm yourself and you realize what's going on."

He continued: "So even in our situation things like that can happen. And it's just the nature of the beast. We're all individuals and we all have our moments. So I always stress that — more now than ever.

Hetfield praised Trujillo during a 2017 interview with the 94.5 The Buzz radio station, saying: "Who else could [have come in and done the job]? I mean, there were a few people we auditioned, I know. It might have worked out with other people, but it's hard to find people that are, say, your age; kind of your upbringing, musically, obviously; ability-wise; they've been on the road. It's not like you're bringing some kid out for his first time, and it's, 'Oh my God!' He's going through all the stuff that you did twenty-five years ago. He's got kids. He's married. It just jelled, and it's still jelling. And his personality is probably one of the best contributions, I think, to the band, 'cause he's so chill, he's so up for anything, he's always in there rehearsing. So he does fit in."