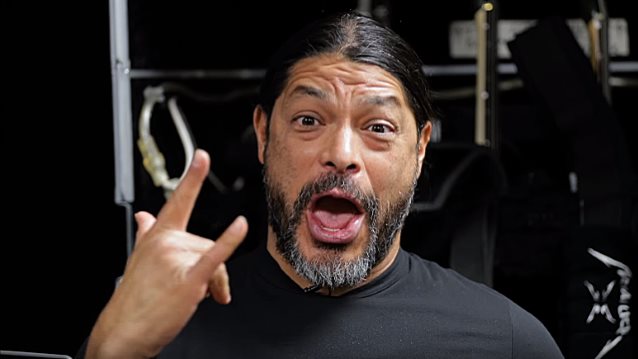 Sofia Samrad of The CW In Washington conducted an interview with METALLICA bassist Robert Trujillo prior to the band's May 10 show at M&T Bank Stadium in Baltimore, Maryland. The show marked the start of the band's first full American trek in seven years. You can watch the full chat below. A few excerpts follow (transcribed by BLABBERMOUTH.NET).

On whether he is excited to begin the touring cycle for the band's 2016 "Hardwired… To Self-Destruct" album:

Robert: "It's very exciting. For us, it's kind of like this first step. We haven't played in the States in this setting, like a stadium sort of tour, proper, it's been over ten years, so there's… I don't want to say 'anxiety,' it's not like we're nervous that way. It's excitement, but it's also unchartered territory because there's some things we haven't done yet that we're going to be doing tonight and that's exciting, but also makes you a little nervous in a good way."

On a METALLICA song that stands out in particular for him:

Robert: "I think with every album there's a song, or sometimes there's obviously more than one or two songs. With METALLICA, it's hard. I tend to like it all, but the older stuff, when we get into the deeper cuts, it really excites me personally. There's a song called 'The Frayed Ends Of Sanity' off of '…And Justice For All' that I really enjoyed playing a couple of years ago. It had never been played live before, maybe it will never be played again live in the future, but it was a moment for me personally. When I first joined, it was a song that I thought would be really cool that if someday we were to play that and we did that. So that was a personal goal, especially after spending eight years on it on my own and then having the guys embrace it. Other than that, I enjoy it all. There's songs off the new album that I'm looking forward to playing live, a song like 'Spit Out The Bone' is really cool. I like 'Confusion'. 'Atlas, [Rise!]'. Everybody seems to be embracing the new songs, which is always great when you have a new record. You want your fanbase and new fans too, to embrace the music, the new music. Rather than constantly playing the classics, the '[Enter] Sandmans' and the 'Master Of Puppets', it's nice to be able to get into some new songs, for us, at least. We like to challenge ourselves and having new material and presenting it to the world is fun and exciting and fresh. We're looking forward to that part of this tour as well. It's exciting for me too, because there's more vocal involvement for me. There's never been an album where I had to sing this much, so it's a personal challenge. That to me, makes it pretty interesting as well."

On his son Tye recently filling in on bass for KORN in South America:

Robert: "I was amazed at the level of passion for that band and also how physical that band is and how physical my son was. It was nerve-wracking for me because I didn't know what to expect. I'm thinking, 'I hope he doesn't get sick!' He's playing niniety minutes and it was a very, very new experience for me and he was fearless. They even have these improvisational moments in their show and he was doing stuff and I was, like, 'Wow, that's amazing.' I would never think of him doing that. He's not traditionally a five-string bass player and he likes slapping, but it's not totally his thing. He was just covering in getting into new territory as a player. He'd get off stage and he's still a 12-year-old. For me, it was a bonding experience, too. I was really, of course, his father, but also like a tour assistant. It's kinda humbling. You come into a situation like METALLICA, but you're on tour with this other band and you're there for your son and washing clothes by hand in the hotel room. If anything, it's a great statement for young people. I believe in rock and roll and heavy music in general. There needs to be a movement from the youth. He proved to the world that at 12 years old he could do it legitimately as good as any adult, and I mean even physically. I don't know if I could do that. I don't know if my neck could do that. I was impressed with him on a lot of different levels and the fact I didn't help him with anything. He did it all on his own. It was really impressive. It was crazy. Focus, dedication and hard work for him."

On how he stays healthy on the road:

Robert: "As we get a little older, we've got to listen to our bodies. We train. We have our thing that we do to get through this and dive into a tour like this. It's a big stage; it's very physical. It's nice to have fun and drink and all that, but you have to gauge it. That's kinda where things are right now. It's all transition and you have to figure out what's good for you and what works for you and what you need to do to get through a two-hour show at our age. But the craziest thing about our situation is I feel creatively, we're on a high. With this new record and the fact that we don't have a shortage of riffs or ideas. That's pretty good. Usually at a certain point in your career as a band you run out of ideas. We don't seem to have a shortage of that. Our problem is figuring out what we're not going to use. Usually those ideas are great, too. That's a good thing."

METALLICA was joined in Baltimore, as they will be on most of the rest of the trek, by VOLBEAT and AVENGED SEVENFOLD. The North American run will hit stadiums in 21 more cities before ending in mid-August.