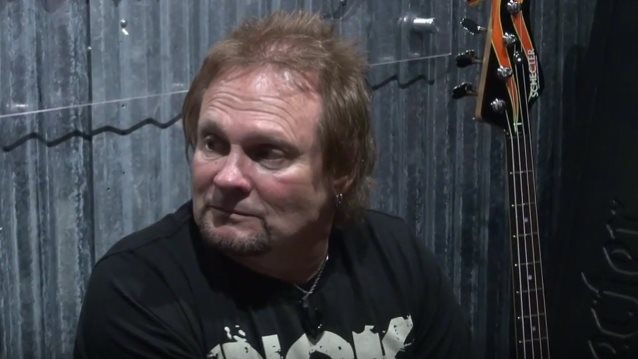 Michael Anthony says that he is open to reuniting with VAN HALEN to celebrate the fortieth anniversary of the release of the band's classic debut album.

Anthony, singer Sammy Hagar, Alex and Eddie Van Halen last teamed up in 2004 for a U.S. summer tour. In exchange for taking part in the tour, Anthony reportedly had to agree to take a pay cut and sign away his rights to the band name and logo.

Asked by Sayaka Shiomi at last month's NAMM show in Anaheim, California if there is a chance he could rejoin VAN HALEN, Anthony responded (see video below): "I'm always the guy that says never say never. But, you know, right now, I'm just having fun doing what I'm doing, and if it happens, it'll happen. I'm obviously open to it, if something happens with it. Next year, I guess, is the fortieth anniversary of our first album, so who knows?"

Anthony revealed in a 2016 interview that he reconnected with VAN HALEN drummer Alex Van Halen less than a year ago after more than a decade of not speaking to each other.

In 2015, Anthony was at the receiving end of some scathing, hurtful comments from Eddie Van Halen, who slammed both Michael's bass playing and singing abilities. "Every note Mike ever played, I had to show him how to play," Eddie told Billboard. "Before we'd go on tour, he'd come over with a video camera and I'd have to show him how to play all the parts," Van Halen said, adding that Anthony's background vocals were "like a piccolo trumpet."

Former VAN HALEN singer Sammy Hagar quickly came to Anthony's defense, saying in a video message: "For Eddie to say he had to show him what to play and then teach him all those songs, that's the biggest line of bullshit in my life. I was in that band for eleven years, there was never a video camera involved of Eddie showing [Anthony] what to play…. Michael Anthony is a bad motherfucker. Fuck you, Eddie Van Halen, for saying that about Mikey. You're a liar."

In a February 2013 interview with Rolling Stone magazine, Roth spoke about the touchy subject of Anthony potentially replacing Wolfgang Van Halen in VAN HALEN. He said: "Ed has his own vision, I'm assuming. We haven't really been able to speak about it and it's a disappointment, just as not having a chance for a reunion of the original band. Clearly, vocals are every bit as much a component of success as a rhythm section or a guitar solo… What we have at our fingertips is arguably one of the greatest high tenor voices ever — that was in Michael Anthony. In our tiny little corner of the universe, that voice is as identifiable as the high voice in EARTH, WIND & FIRE, as identifiable as the high voice in the BEACH BOYS. VAN HALEN is an indelicate house blend of both — that's intentionally."

Anthony has played primarily with Hagar in the thirteen years since he last performed with VAN HALEN, in groups like CHICKENFOOT and THE CIRCLE.