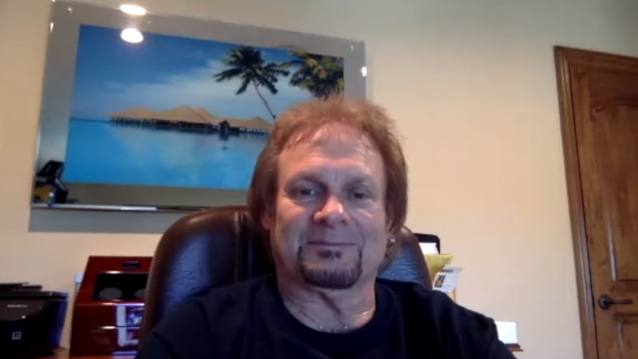 In a new interview with "The Jeremy White Podcast", ex-VAN HALEN bassist Michael Anthony was asked if he would consider joining his former bandmate singer David Lee Roth on stage at one of his solo concerts to perform a few of the group's classic songs. He responded (transcribed by BLABBERMOUTH.NET): "When he did his residency stuff in Las Vegas out here — 'cause it turned out I couldn't it anyway; I think we had something going on with THE CIRCLE — but I was actually going to show up and see about going up on stage and jamming with Dave. 'Cause I've got no beef with any of the guys about any of that stuff. At this point in the career and my life, it's, like, hey, I'll play it all. I'm sure if it came up, if it was the right situation, let it happen."

VAN HALEN and Anthony had not been on good terms for more than a decade, with Anthony not invited to join the reunion with Roth that began in 2007. The subsequent two tours and studio album, "A Different Kind Of Truth", featured Eddie Van Halen's son Wolfgang on bass.

Anthony took a pay cut and signed away all of his rights to the band name and logo in order to participate in VAN HALEN's 2004 tour, which featured Sammy Hagar on vocals.

Last November, Wolfgang' revealed that Eddie had contemplated a "kitchen-sink tour" that would have included Anthony, as well as vocal turns from both Hagar and Roth. There was even talk about bringing back Gary Cherone, who sang with VAN HALEN on one poorly received album, 1998's "Van Halen III".

The rumors originally started with Roth, who hinted to Vulture that VAN HALEN would be playing stadiums with Anthony back in the lineup.

In a February 2013 interview with Rolling Stone magazine, Roth spoke about the touchy subject of Anthony potentially replacing Wolfgang in VAN HALEN. He said: "Ed has his own vision, I'm assuming. We haven't really been able to speak about it and it's a disappointment, just as not having a chance for a reunion of the original band. Clearly, vocals are every bit as much a component of success as a rhythm section or a guitar solo… What we have at our fingertips is arguably one of the greatest high tenor voices ever — that was in Michael Anthony. In our tiny little corner of the universe, that voice is as identifiable as the high voice in EARTH, WIND & FIRE, as identifiable as the high voice in the BEACH BOYS. VAN HALEN is an indelicate house blend of both — that's intentionally."

Eddie died in October at St. John's Hospital in Santa Monica, California. The iconic VAN HALEN axeman passed away from complications due to cancer, his son confirmed.