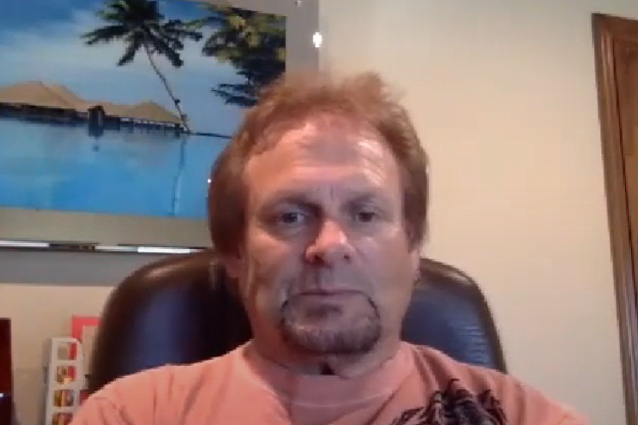 In a brand new interview with Darren Paltrowitz, host of the "Paltrocast With Darren Paltrowitz", former VAN HALEN bassist Michael Anthony was asked if he has given any thought to writing an autobiography. He responded (as transcribed by BLABBERMOUTH.NET): "I have people after me all the time about stuff like that. Obviously, somebody wants to get another perspective from one of the original VAN HALEN guys on all the dirt from the band, and I don't know if I'm ready to come out with something like that. Obviously, it wouldn't be the dirt like some people would wanna hear it, because I'm not that kind of person. A lot of stuff that went on back then is what is understood, between the band, it's the secret brotherhood of 'what's on the road stays on the road'-type stuff. But I think possibly at some point I'll probably do something; I'm just not really ready to do it quite yet. I also have a couple of people after me to do some recipe books with my hot sauces too, which I've kind of been thinking about. I really don't have the time to write at the moment, but I wouldn't mind doing something like that too."

When Paltrowitz asked Anthony if that means that a book from him "in some form, whether it's about VAN HALEN or recipes, is very, very likely," Michael responded: "I don't know [about] 'very, very likely' — somewhat likely. When I slow down a little bit to find the time to actually do it properly."

Back in March 2011, former VAN HALEN singer Sammy Hagar's autobiography, "Red: My Uncensored Life In Rock", topped The New York Times' hardcover nonfiction list. In the book, Hagar wrote about original VAN HALEN frontman David Lee Roth: "I hated Dave. The guy rubbed me wrong." He then added: "I'm sure I rub all kinds of people wrong, so it's not like I'm putting him down."

Roth's own memoir, "Crazy From The Heat", failed to make the best-seller list back in 1997.

VAN HALEN and Anthony had not been on good terms for more than a decade, with Anthony not invited to join the reunion with Roth that began in 2007. The subsequent two tours and studio album, "A Different Kind Of Truth", featured guitarist Eddie Van Halen's son Wolfgang Van Halen on bass.

Anthony took a pay cut and signed away all of his rights to the band name and logo in order to participate in VAN HALEN's 2004 tour, which featured Hagar on vocals.

In November 2020, Wolfgang revealed that Eddie had contemplated a "kitchen-sink tour" that would have included Anthony, as well as vocal turns from both Sammy Hagar and Roth. There was even talk about bringing back Gary Cherone, who sang with VAN HALEN on one poorly received album, 1998's "Van Halen III".