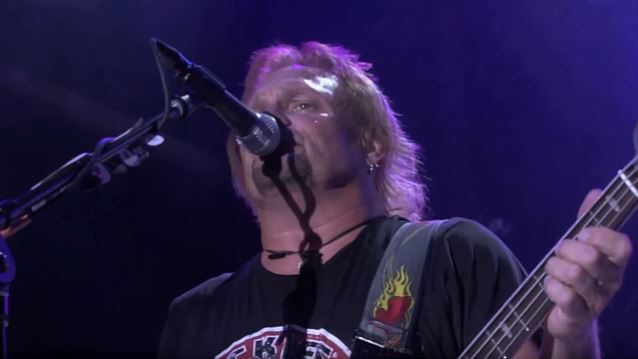 Former VAN HALEN bassist Michael Anthony has shot down rumors that he is rejoining the band.

Anthony, singer Sammy Hagar, Eddie and Alex Van Halen last teamed up in 2004 for a U.S. summer tour. In exchange for taking part in the tour, Anthony reportedly had to agree to take a pay cut and sign away his rights to the band name and logo.

In a new post on his Facebook page, Anthony wrote: "I want to clarify some confusion surrounding a recent picture from a video shoot for my new Schecter signature bass that will be debuting at NAMM next week. Apparently, because a road case with the name 'Van Halen' on it is in the photo (which was taken by someone off to the side of the shoot),there is speculation of me having involvement with the band. This is not true. The shoot took place in my warehouse and this is just one of the many road cases I still own from the VH days that happened to be there. As a matter of fact, THE CIRCLE will be performing at the Route 66 Casino in Albuquerque, NM next week. I hope to see you all out there!"

"Every note Mike ever played, I had to show him how to play," Eddie claimed. "Before we'd go on tour, he'd come over with a video camera and I'd have to show him how to play all the parts." Van Halen also downplayed the role Anthony's harmonic backing vocals play in creating the group's signature sound. "Mike's voice is like a piccolo trumpet. But he's not a singer. He just has a range from hell," Eddie said. "Mike was just born with a very high voice. I have more soul as a singer than he does. And you know, people always talk about Mike's voice on VAN HALEN songs, but that's a blend of Mike's voice and my voice. It's not just him."

In a February 2013 interview with Rolling Stone magazine, Roth spoke about the touchy subject of Anthony potentially replacing Wolfgang Van Halen in VAN HALEN. He said: "Ed has his own vision, I'm assuming. We haven't really been able to speak about it and it's a disappointment, just as not having a chance for a reunion of the original band. Clearly, vocals are every bit as much a component of success as a rhythm section or a guitar solo… What we have at our fingertips is arguably one of the greatest high tenor voices ever — that was in Michael Anthony. In our tiny little corner of the universe, that voice is as identifiable as the high voice in EARTH, WIND & FIRE, as identifiable as the high voice in the BEACH BOYS. VAN HALEN is an indelicate house blend of both — that's intentionally."

I want to clarify some confusion surrounding a recent picture from a video shoot for my new Schecter Signature Bass that...