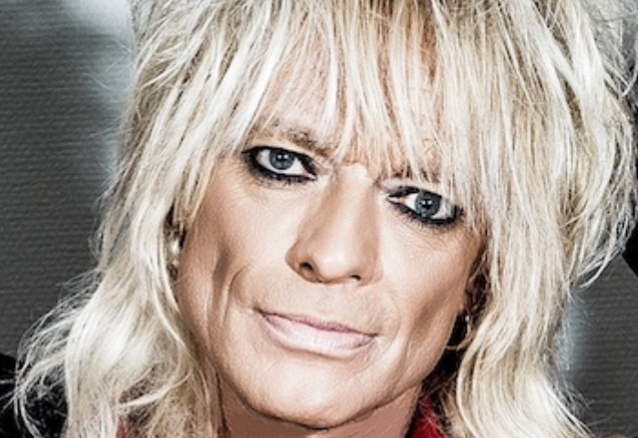 According to Ilta-Sanomat, Finnish streaming company Elisa Viihde has removed the documentary about former HANOI ROCKS singer Michael Monroe from its service just days after the film was initially made available.

Saku-Petteri Perintö, the film's director and CEO of the production company Love U Mean It, told Ilta-Sanomat: "The documentary was released for a few days before Monroe started to put pressure on the distribution company. The distribution has therefore been temporarily suspended."

Perintö went on to say that the documentary was originally planned for release in 2017 before "extensive additional reshoots" were carried out at Monroe's request. "The real reason for Monroe's reaction, in our view, is therefore that he entered into an overlapping contract for a new documentary with another production company without our knowledge, and I would suggest that he has a problem with that," he suggested. "Obviously for this reason he wants to make it difficult for this documentary to be released."

Despite online rumors that the documentary had been released "illegally without Monroe's permission," Perintö stresses that he is perfectly within his legal right to make the film publicly available.

"These allegations are completely absurd," he said. "We have been filming the documentary in collaboration with Monroe for about five years. We own the rights to the documentary and have distributed it under existing distribution agreements of which Monroe has been aware. It is therefore a perfectly legal document, which has been legally released.

"It is a pity, because we hold Michael Monroe and his career in very high esteem," he added. "The documentary is of a very high quality and has been very well received."

Lepistö told Ilta-Sanomat the ambiguities were unexpectedly revealed only after the documentary's agreed-upon release date and it was removed from Elisa Viihde until the parties find a solution.

"There is an agreement between the production company and Monroe to which Elisa is not a party and we do not know the details. As the promotion of cultural content is important to Elisa, we thought it best to support the suspension of the documentary until Monroe and the production company have reached a solution."

Michael touched upon the dispute with the documentary's director in a December 2020 interview with the "In The Trenches With Ryan Roxie" podcast. At the time, the then-58-year-old singer stated about the film: "There was somebody who started making it some years ago, but it wasn't working out with the person, so I'm now making it — someone else started making it, and they really know their business. So we started on it at the end of the summer [of 2020], and it's gonna be a really good movie. But we're gonna take our time with it. We're aiming at releasing it in a couple of years when I turn 60 — in 2022.

"It's not gonna be a list of things I've done," Michael clarified. "It's gonna be more like… There's a movie about Diego Maradona, the football player, and [Ayrton] Senna, the [Brazilian] Formula [One racing] driver — they were great movies. And that's the idea for this movie. It's a great story, and you can only tell it once. The director has a great vision. We're not gonna rush it. At the latest, [we'll release it] in 2022. It could be a good celebration when I'm gonna turn 60."

The December 27 press release about Perintö's documentary described it as "the first wide-ranging and in-depth documentary on HANOI ROCKS." According to the release, "The fast-paced and moving documentary takes viewers deep into Michael's soul and behind the scenes of the rock world. The extensive documentary has been in the works since 2017 and has also been filmed extensively outside Finland." The documentary includes an interview with Michael's mother Marjatta and delves into the deaths of HANOI ROCKS drummer Nicholas "Razzle" Dingley, who was killed in a car accident caused by MÖTLEY CRÜE's Vince Neil, and Monroe's first wife Jude Wilder. Also interviewed for the film were Slash and Duff McKagan from GUNS N' ROSES, and Chris Shiflett from FOO FIGHTERS.

Last spring, Monroe, who was born as Matti Antero Kristian Fagerholm in 1962 in Finland, spoke about the documentary during an appearance on a video podcast hosted by Todd Kerns, the bassist of SLASH FEATURING MYLES KENNEDY AND THE CONSPIRATORS. He said: "[It's gonna be] the whole story of my life, pretty much, based around the 10 years [I spent] in New York. But it starts with the beginning of HANOI, and [it's] really a documentary of my life and me. So that's in the works. But it's the kind of thing you only make once in your life, so I wanna make sure it's [done properly].

"People always say, 'What about making a movie with actors?' It's always kind of corny when people act as somebody," he continued. "But after the documentary is made, then I don't care anymore. But I wanna make it as great as possible. 'Cause it's a fascinating story, even if I say so myself.

"We already interviewed Slash and Duff [McKagan from GUNS N' ROSES] and Chris Shiflett [FOO FIGHTERS] for the original version, but we're gonna now start over and make it a documentary movie that's not only about all my accomplishments. Of course, it's great to have all these cool, great names say things about me that describe my character. But, really, make it a fascinating story, so people who do not give a shit about me or even rock and roll will be interested in watching."

HANOI ROCKS originally broke on to the hard rock scene in the first half of the 1980s, becoming one of the first Finnish bands to make an international impact. HANOI ROCKS's career was subsequently derailed after Razzle's 1984 death. Internal tensions and the commercial disappointment that was 1985's "Rock & Roll Divorce" led to Monroe leaving the band that year, thus putting an early end to HANOI ROCKS.