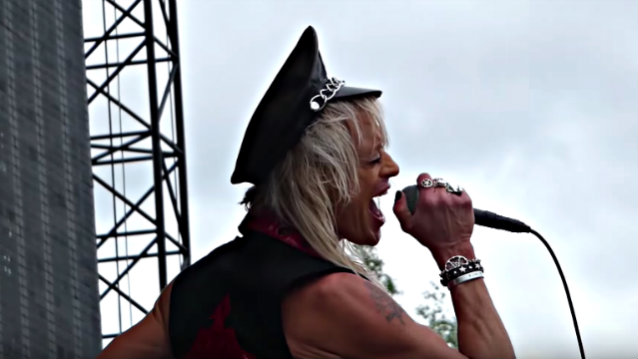 Former HANOI ROCKS frontman Michael Monroe was interviewed by Planet Rock following his December 3 performance at the Planet Rockstock festival in Trecco Bay, South Wales. The full chat can be viewed below. A few excerpts follow (as transcribed by BLABBERMOUTH.NET):

On how he prepares for his high-energy live performances:

Michael: "I'm way too impatient for yoga. I stretch and I don't go to gyms or anything like that. I exercise at home. The inner stomach muscles are the key to getting rid of the pain in your back. I'm 55, and my spine is a little worn-out in places, so I started getting this real bad back ache after shows. I went to some physical therapists, and they had some pointers. The inner stomach muscles support your back, so I started doing certain exercises and did them for two or three months. I started feeling like, 'Okay, maybe I have another 10, 20 years of doing this.' When you're aging, you've just got to work harder at it. I've always kept myself in shape so I can do what I do. It's a good kind of curse."

On his upcoming plans:

Michael: "In March, we're going in the studio to record a new album with this band. I'm doing 'The X Factor' in Finland. I did 'The Voice Of Finland' for six seasons, which is very different from any 'Voice' in any other countries. It's rock n' roll — I brought a lot of rock n' roll into it. I speak my mind; I get a chance to tell the truth and nobody can stop me. They're live shows — nobody can censor me. I don't abuse that freedom; I just say things as they are. I get to choose in the battle episodes, I got to choose all the songs. I took great pleasure in that, presenting bands and music to people in Finland that they don't know about. CHEAP TRICK, for example — nobody knows them in Finland at all. I had four or five CHEAP TRICK songs in the show over the years."

In June, Monroe released "The Best", the first official collection of his (ongoing) solo musical exploits, featuring prime tracks from 1987 right up to 2017.