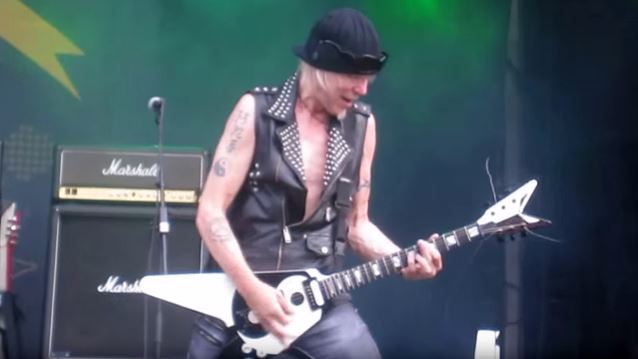 MICHAEL SCHENKER Says He Turned Down Chance To Join MOTÖRHEAD

Michael Schenker says that he was asked by Lemmy to join MOTÖRHEAD as the band's first guitarist but claims that he declined because he "just couldn't see how it would work."

Asked in a new interview with Metal Talk about the passing of Lemmy and whether he had any connection with the MOTÖRHEAD leader over the years, the German axeman said: "Yes, when he first put MOTÖRHEAD together, Lemmy asked me to be the guitarist. It was many years ago, but we toured together when he was in HAWKWIND and I was with UFO. We toured the States together, and I saw Lemmy every day, but later when he started to put MOTÖRHEAD together, he approached me to be his lead guitarist but I wasn't interested… I couldn't see that it would be something for me. I declined. I just couldn't see how it would work."

Schenker also reportedly turned down opportunities to join AEROSMITH as Joe Perry's replacement in 1979 and Ozzy Osbourne's group after the death of Randy Rhoads. He told The Bigfoot Diaries in a 2011 interview: "In '79, I believe, it was [manager] Peter Mensch who asked me if I would want to jam with AEROSMITH to see if I liked joining them. I went to New York but everything was pretty much out of order. So we never got to play, but later when Steven [Tyler] got sick, I rehearsed with Joe Kramer and Tom Hamilton for my solo album."

He continued: "In around '81, Ozzy Osbourne called me up in the middle of the night telling me that Randy had just died and asked if I could help out. I was in the middle of pre-production with Cozy Powell and Graham Bonnet. It was bad timing, but on the other hand, AEROSMITH, Ozzy Osbourne or any other band with history was not good for me. It would always mean that I would have to learn other guitarist's riffs. And that was not what I wanted. I was born to create and invent."