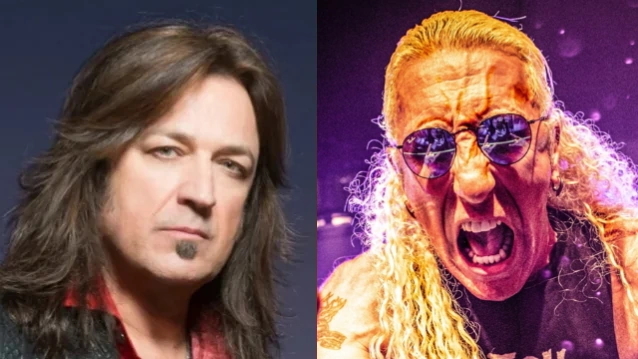 MICHAEL SWEET Once Again Defends KISS Against DEE SNIDER's Criticism: 'It's Really None Of His Business' What They Do

In a recent interview with the "Appetite For Distortion" podcast, the TWISTED SISTER frontman said: "I hate what KISS is doing with Ace and Peter's makeup on. I'm not a fan.

"When I left TWISTED and I went out at some point doing TWISTED's music, I never even thought of calling it TWISTED SISTER without the other four guys. Everyone is saying, 'But you're TWISTED SISTER. You wrote the songs.' I said, 'That's not TWISTED SISTER.' And I won't do that out of respect for the other members of the band. I could've made a lot more money doing that, but I would not do that.

"When TWISTED SISTER reunited, the original members — the classic lineup — [bassist] Mark Mendoza walked in, pulled out a gun, put it on top of his amplifier, and picked up his bass. And when people tell me it's tough to put your band back together, my bass player brought a fucking gun to the first rehearsal and openly spoke about hating me.

"I'm a believer that if you're gonna use the brand, you should have the classic lineup — unless someone's dead; then you're excused. You're excused because he's dead. Otherwise, you'd better show up, and it'd better be the original band."

Sweet, who often chimes in on controversial topics, offered his opinion on the subject during an interview with "The Real Radio Show" with Frankie Dee on TuneIn Radio. He said: "My take on [Dee's comments] is, and this coming from a guy who's very opinionated, so people may raise an eyebrow to this and laugh at this possibly, I think it's really none of his business. It's [Paul and Gene's] band and their brand — they get to do whatever they wanna do. And granted, fans have the right to, of course, express their opinions, but to do so in such a… it seems to be a negative light, I just feel like… It's their band. It's working, obviously. It's not hurting the sales. The majority of the fans don't seem to mind it. They're going out and buying tickets to KISS shows and selling them out, so does it really matter? No. To an avid KISS fan, those are fighting words, though. How dare you even replace Ace and Peter? But obviously, they've proved that that can be done."

This was not the first time Snider had blasted Stanley and Simmons for allowing Singer and Thayer to take on the classic personas of their KISS predecessors instead of designing new characters. Back in 2015, Dee told Trunk: "I don't see how people could accept this. Tommy Thayer? I'm sorry. It's insulting. Not only did he play in a tribute band of KISS, he's imitating Ace in his entire act!" Snider went on to bash Thayer for allegedly copying Ace's stage moves. He said: "Oh my God — that's disgraceful. When KISS replaced Ace and Peter, and they brought in guys [Eric Carr and Vinnie Vincent] who had their own makeup and their own thing, that was acceptable. That was awesome. They were their own characters."